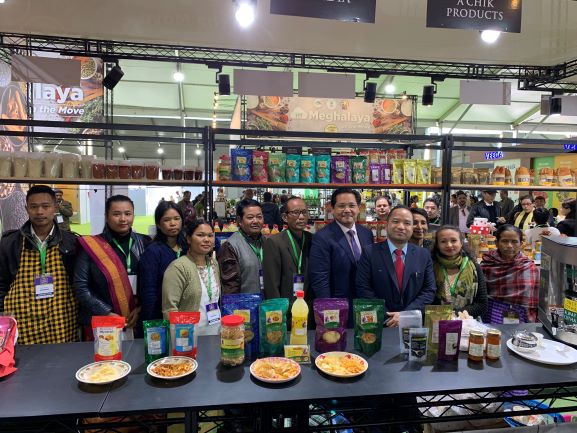 Speaking during the Inaugural Session of the three days’ food festival Chief Minister, Conrad K Sangma, said the North East has a great potential and he hoped that the food festival would provide the right organization, platform and network to farmers, entrepreneurs and all stakeholders in the food industry. “North East has a great potential and farmers and entrepreneurs are doing so well but there is a missing link somewhere and that is why it was important to have such a food festival in North East on a common platform,” he said. He added that the three days’ festival would bring together farmers, technology providers, entrepreneurs, buyers, chefs, hotels and all stakeholders in food industry in a single massive platform. “The objective of the food festival is to give exposure, connection and opportunities to the farmers and entrepreneurs of the North East,” he informed. He also said that the government intends to take the food festival forward every year making it an annual event so that it will not only be beneficial to the North East but the entire South East Asian region. “We are hopeful and targeting that this will be the biggest food festival in the South East Asian region,” said the Chief Minister.

A collaboration between the State Government of Meghalaya, Inter Ads Exhibitions Pvt Ltd, sole licensee of SIAL in India, the world’s largest food innovation network with over 50 years of global food innovation experience, the North East Food Show 2019 is platform of North Eastern India that is focussed on creating a global platform to ‘Inspire Food Business’ for this part of the country. The North East Food Show is also the curtain raiser to ‘Charting of a new course through food processing and supply chain management’ for the North East. A series of conferences, workshop and demos will be held which will culminate in the North East Chief Ministers’ Conclave on the last day in which key decision and policy makers from the Union and State governments along with key representatives from the industry will be present for deliberations.

The Chief Minister also virtually launched the Meg Tea Factory, Upper Shillong, the website of the Directorate of Food Processing and the Meghalaya Plastic Free Challenge Bags during the occasion.