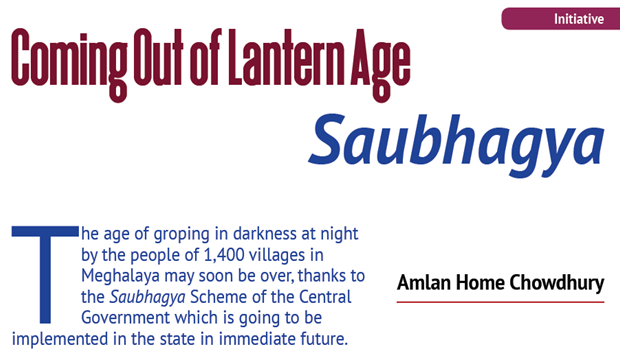 Ironical is may seem, though the joint initiative of Central Government and Government of Meghalaya was launched for The 24x7 Power for All, the villages in hundreds in several parts of the state continued to remain in lantern age.

Meghalaya has about 6,000 villages. Out of them, the rural electrification was started in 4,959 villages as part of the Saubhagya Scheme. But only 3,469 villages were electrified and rest thrown in the devil’s darkness.

Why? This is a big question. The answer to this question was recently found in large scale anomalies in state’s power department came by the Public Accounts Committee (PAC) of the Meghalaya Legislative Assembly.

The PAC discovered that more than 1,400 villages were yet to be fully electrified. Though a hefty Rs 657 crore was involved to make the state electrified, the result was not been achieved (raising the question why?).

Meghalaya was divided under two packages:

Why this happened is best known to the electricity department of the state.

Before we get into details of the anomalies, let us have a look at the power generation scenario of Meghalaya. The state (as of October 2017) had a total installed power generation capacity of 558.32 MW, comprising 353.03 MW from state utilities and 205.28 MW from central utilities.

Of the total installed power generation capacity, 387.19 MW was contributed by hydropower, 140.09 MW by thermal power, and 31.04 MW by renewable power.

All households in Meghalaya were to be electrified under the Saubhagya Scheme (Pradhan Mantri Sahaj Bijli Har Ghar Yojna) by the end of 2018. But the PAC found it was not done. It found anomalies in the implementation of the scheme. The state still has 139, 267 un-electrified households as of today.

In fact, India has been witnessing a vigorous process of rural electrification since 2001-02. The Saubhagya Scheme came as a further boosting factor. But the state lagged behind thus retarding generation of rural income also as power is must for supporting income-generation.

Though India achieved 100% electrification in 25 states at the end of 2018, Meghalaya failed to get this distinction. This is despite the reason that it is a small state whereas many bigger states achieved it. Meghalaya along with Assam, Rajasthan and Chhattisgarh are yet to electrify the entire states.

Meghalaya has the highest number of un-electrified households in the West Garo Hills district followed by East Garo hills. This is despite the reason that the Central Government announced incentives for Distribution Companies or DISCOMs who met the target of household electrification. Apparently, the DISCOM scheme also failed in Meghalaya.

Since the power demand is sharply rising in Meghalaya, there is a reason to worry about the findings of anomalies in electricity department of state by the PAC. It is more so as the World Bank, in its latest report, has predicted that the power-demand in Indian states are likely to be trebled by 2040.