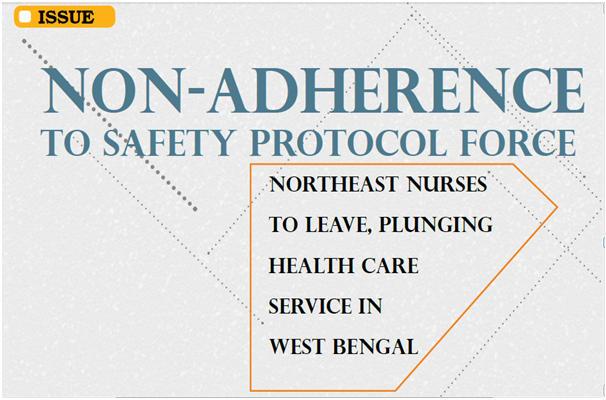 Amidst the spike in covid-19 cases in India, hospitals in West Bengal are in a spot, with over 300 nursing staffs from North-eastern states, leaving their jobs and heading home in Tripura and Manipur.

Out of these, 185 nurses are from Manipur, 66 of them have reached the state and are quarantined in the state’s quarantine centres and 119 of them are still stranded in Kolkata after the government of Manipur decided to put on hold the extraction efforts.

Rupak Barua, the Vice President of the Association of Hospitals of Eastern India and Group CEO, AMRI Hospitals confided that he anticipates a health crisis once the occupancy level picks up. The same concern is echoed by Charnock Hospital, where 27 nurses resigned, Peerless Hospital whose 25 nurses have left, 16 from Fortis Healthcare, 11 each from Bhagirathi Neotia Woman & Child Care Centre and IRIS Multispeciality Hospital, and 10 each from Sri Aurobindo Seva Kendra and Apollo Gleneagles Hospitals.

Reacting to the ‘exodus of nurses from northeast’ sectoral media reports painted the nurses as villains who shrank from their role in the battle against the pandemic and took off. The reports even accused the Manipur government of instigating the exodus by issuing a call to ‘come home’ to the nurses to lend their hands in the state’s fight against the Covid pandemic, promising befitting employment. Manipur Chief Minister, whose government coordinated with the government of West Bengal and the ministry of Home Affairs, processed the travel passes for at least 189 Manipuri nurses from Kolkata to Manipur, categorically denied the ‘instigation charges’ saying that his government did not issue any call to ‘come home’. He however, defended the nurses by asserting that if the nurses want to come back home he cannot deny them entry.

The Kolkata returnee nurses quarantined at the JNV Yaralpat in Imphal East, speaking on the condition of anonymity revealed that negligence in following safe protocol by employing hospitals, pay anomaly and social and security issues compelled them to formally take leave of absence and in some cases resign from work and come home taking advantage of the state government’s extraction efforts of the state’s natives stranded outside the state.

Describing the compelling conditions for their decision to leave their hospitals, the returnee nurses top ranked the fact that the hospital management did not prioritize the safe of frontline nurses by ignoring their constant demand for conducting covid test even after long hour’s exposure to covid19 patients and neglecting self-isolation protocols.  Nurses said, they had been demanding quarantine time or tests after being exposed to coronavirus after treating COVID-19 patients. But the hospitals neither let them self-isolate nor got them tested. Given this situation, their concern was going back to the hostels and putting their roommates at risk.

“What happens is that we are exposed, so the people staying with us at the hostel are also being exposed to the virus. They are not even getting us tested. Whether we are positive or negative, how will we know?” questioned a returnee nurse, hiding her face under her surgical mask.