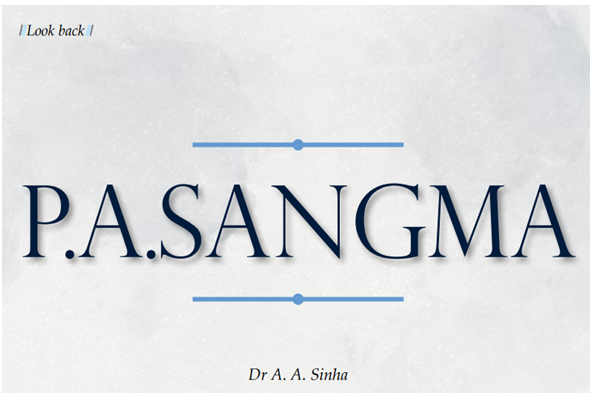 As September  approaches there begins a change in Delhi, morning becomes cooler, midday sun a bit friendly, humidity too pretends to be packing off  and a sense of an all pervasive  thermal  comfortability becomes visible  outdoors. I still remember P A Sangma was born on 1st September 1947and the remembrance takes me to look back and a montages of memories come crowding in: some events are still clear while some got blurred, perhaps the inner flash is partly diffused.

I first got him as my student at St Anthony's College Shillong. Generally students write about their teachers, but today I plan to write about my former student Purno Agitok Sangma who always carried a basketful of sunshine where ever he went.  Padma Vibhushan (well deserved though Posthumously Awarded) Purno had a meteoric rise in politics. Meghalaya is grateful to Father Giovanni Battista Busolin, who became Purno's  'philosopher and guide" who had spotted in this young boy the seeds of brilliance and a brighter healthier tomorrow, who felt that the chrysalis in him was bound to turn into a charming butterfly ready to crest the peak of excellence. Purno is always remembered for his bustling and cheerful style. An impressive orator his lapidary and piquant speeches had a distinct flavour of bubbling humour smeared with a pinch of refreshing wit, sometimes sprinkled with oxymoronic tidbids. In fact, he had that infectious smile which was a simulacrum of happiness.

I still remember, when I heard the news of Sangma’s sudden death on 4 March 2016, I was at Delhi and was stunned. I could not believe that Purno would leave us so soon.  My first reaction was why such a bright star of the Indian political sky had to leave the world so early and felt uttering like Lear "stay a while". My prosaic language was unable to reflect the poetry of the silent anguish of my feelings. And soon memories began sandwiching and I could see Purno as a young boy of BA first year. Since then, I was fortunate for he had maintained contact with me off and on despite his very busy schedule:  as a young leader of the Indian National Congress, then as an MP, as Union Deputy Minister etc and finally as Speaker of the Lok Sabha. Everywhere he left an indelible mark as a human being, as an able administrator, as a charming personality who was loved and genuinely respected by one and all. He evinced an irresistible magnetism “a most affable, tactful and charming personality". He was bonhomie to one and all, and was a man of bucolic temperament, the qualities he automatically acquired from his childhood surroundings having been born at a small village Chapahati, flanked all round by hills and forests in the West Garo hills of Meghalaya. His early life was greatly influenced and inspired by his mother Chimri A Sangma. Perhaps these lines from   Miranda's

"O brave new world that hath such people in it" is an apt depiction of Purno Sangma.  I tried to turn the pages of his book "A Life In Politics" which he had presented it to me. The moment, I touched just the cover page, I felt a weight of memory in my finger tips. The past began unreeling, the seductive scent of the fresh air, the gentle breeze coming across from the young pine trees of Shillong began invading me. Memories sometimes are so obstinate that they stick to us like limpet. I had to struggle hard to disengage myself. Purno's conscience was as vigilant and vigorous as the conscience of famous Gladstone and the great leader Jaya Prakash Narayan. Memories and amnesia often embrace each other and these few lines which I would be scribbling might display an invisible fusion of the two, and for that aberrations my profound apologies.

Ethical matters can never be measured volumetrically. Sangma's life too needs to be measured with a new algorithm, with different dialectics. His life was devoted to the nation. A true patriot, a zealous nationalist who assiduously worked for the upliftment of the weak, the poor, the down trodden irrespective of their faiths and colours with all his might and main. To him nation was the first and the last priority in his life and all other principles and ideologies become sans consequence. That's why, he left the Congress, then the Nationalist Congress Party (NCP) but continued his onward march to make a better India, India of his dream, to turn his country into a garden of Eden. Throughout his life he strove towards reviving timeless human values and prevent the plasmolysis of our culture and traditions which had begun etiolating. He was indeed a colossus, who walked beyond the diocese of self centrism and inspired people to float upwards, upwards from history and also from time and tread on the unpaved road of tomorrow.