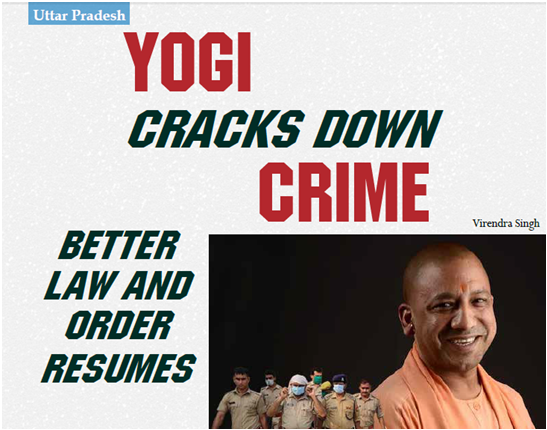 With clear message that reign of law will rule and no criminals will be spared, the Yogi Adityanath government in UP launched a crusade against hard core criminals, resulting in better law and order situation in Uttar Pradesh.

As many as 122 alleged criminals were killed in over 6,000 encounters in Uttar Pradesh in the past three years, while 13 policemen also lost their lives during this period, a senior police official said.

He also said over 2,000 criminals were injured in police action, while over 13,000 of them have been arrested.

"Thirteen policemen have been killed in action in as many as 6,126 encounters (in UP), while as many as 122 criminals have been gunned down," Additional Director General of Police (Law and Order) Prashant Kumar said while sharing details of police encounters.

As many as 13,361 criminals have been arrested, while 2,296 criminals were injured in police encounters, in which 909 policemen were also injured in these incidents. Referring to the Kanpur ambush in which eight policemen were killed, Kumar said, "Of the 21 named accused in the incident, six have been killed and four arrested so far. A hunt is on to nab the 11 other accused".

Eight police personnel, including a DSP, were gunned down by the henchmen of gangster Vikas Dubey in Bikru village of Kanpur on July 3. Seven others, including a civilian, were injured in the attack after the police team entered the village past July 2 midnight to arrest the gangster. Dubey was later killed in an encounter on July 10 after police claimed that he tried to escape from the spot in the Bhauti area where the vehicle carrying him from Ujjain to Kanpur met with an accident.

Kumar said, overall there has been a decline in the crime rate in the state this year compared to the last year. "A total of 579 instances of loot took place in the state from January 1, 2020, to June 15, 2020. This is 44.17 per cent less compared to the crimes committed in the same period in 2019”, the ADG (Law and Order) said.

As many as 913 incidents of rape have been reported this year so far, a decline of 25.41 per cent compared to the last year. Sending a big message to those involved in heinous crimes against women and girls, the Uttar Pradesh government has sentenced 23 accused persons to life imprisonment in different cases.

The Uttar Pradesh government had recently launched `Mission Shakti’ to prevent crime against women and girls across the state and the latest action has come as a big boost to the newly launched mission.