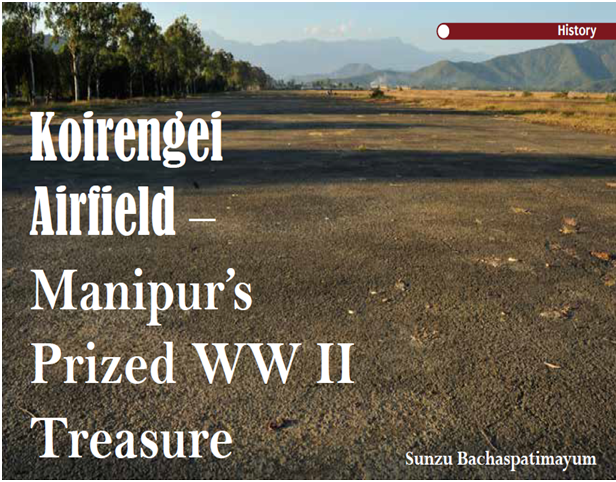 It has been said by qualified military historians that World War II was a war of logistics. It was characterized by how manpower and resources were mobilized and the energy with which the two sides attempted to destroy each other’s material resources for war.

This is very true for the battle of Imphal and Kohima where the British successfully foiled the Japanese attempt to compel the Allied Forces to surrender, by cutting off the supply lines to the garrison in Imphal, by maintaining a strong supply line via the air route.

“Had it not for the Koirengei airfield, the outcome of the whole Burma Campaign during World War 2 would have been very different,” observed Christopher David Johnson, the British war historian who wrote ‘Forgotten Army’s Boxes of Lion’, a book which details the true account of the defence and evacuation of the largest supply depot on the Imphal Plain during the Japanese siege of Imphal in 1944.

“When the Japanese Imperial Army began their “march on Delhi” in early 1944, the Imphal Plain and the whole of the British IV Corps were besieged for three months with the only way in or out for men and materials being by air. The lives of thousands of British, Indian, African and Gurkha troops depended on tons of airdropped supplies carried out each day. Rationing was also adopted when the Siege began to bite. This allowed the Allied Commander, General William Slim, to hold out while the Japanese lines of communications faltered and ultimately failed to supply their war efforts and lead to the British breakout on 22nd June 1944. During this period not only were fresh reinforcements and materials flown in but also thousands of wounded men were flown out to safety in the hospitals in India. Additionally, thousands of troops whose work could not continue like the Engineers and labourers who were involved in building roads and infrastructure were also flown out to reduce the daily consumption rate,” explained the war historian whose father was one of the British soldiers who survived the World War 2. “On a personal note, I am also a beneficiary of this important airfield as my father depended on those supplies until he was flown out of Imphal, half way through the Siege. Were this not possible, then there is a chance, I would not be here now telling you this,” Johnson added with gratitude.

If it weren’t for the several airfields built in Northeast India by the British for a strong air support, the unprecedented Japanese offensive into Northeast Indian could have bear fruit and the course of history altered.

Due to Japanese occupation of British Burma, it became vital for the British Army to build airfields in the Northeast India to counter and defeat the Japanese. As many as 200 airfields were commissioned to be build in the whole of Northeast India and at least 10 of these were planned in Manipur alone. Before the Japanese incursion, as many as nine airfields were completed, which included ‘fair weather’ airfields as well as ‘all weather’ airfields. Of these, six airfields were scattered around the Imphal Valley. The fair-weather airfields were essentially carved out of paddy fields at Kangla, Wangjing and Sapam. The three ‘all-weather airfields’ were the airfields at Tulihal, Palel and at Koirengei. The airfield at Koirengei was also called the Imphal Main or the Imphal ALG (Advance Landing Ground). It was the busiest airfield and considered the most important. It served as the main supply line for the British-Allied Forces during the ‘3-month Siege of Imphal’.

The battles of Imphal and Kohima remain largely forgotten in spite of being voted as Britain’s greatest battle ever and Japan’s most reckless of all World War 2.

After opening salvo on Pearl Harbour in December 1941, Imperial Japanese Army advanced through East Asia with the objective of creating what was called the Greater East Asia Co-Prosperity Sphere, an Asian economic and political block sans western influence.

In January 1942, Japanese troops advance into British Burma, gaining control of the whole country in matter of just five months. With the total occupation of Rangoon (now Yangon), the Japanese had secured almost the entire areas envisioned as the Greater East Asia Co-Prosperity Sphere. The retreating British and Indian forces fled to India.

To consolidate their control of Burma and to mount pressure on the British, the Japanese set up the Burma Area Army with Gen. Masakazu Kawaba as its commander. With a design to further inspire the ongoing freedom movement in India, the Japanese granted Independence to Burma in August 1943. Another development that the Japanese aided was the stationing of the formation of the Indian National Army with Subhas Chandra Bose as the Supreme Commander in Burma.

Contrary to the Imperial Japanese Army’s prideful that it had not lost a single war, Japan suffered a series of defeat in the pacific to US forces and the war fronts were actually drawing closer to the homeland. Japanese Army Commanders were desperate to reverse their misfortunate. Lt. Gen Renya Mutaguchi, the field commander of the Imperial Japanese Army, who commanded the battles of Imphal and Kohima felt that an offensive operation against India was the most effective plan to turn off the tide of War. Plan was to capture a strategic British Army base in India.

In the spring of 1944, Japan launched an unprecedented offensive into Northeast India - code-named U-Go. Japanese troops crossed the mighty Chindwin river, which ran 600 metres wide at several places, trekked the rugged Arakan mountainous region with peaks as high as 2000 metres in a 470 kms march.

Their aim was Imphal, an allied base, located on a plain surrounded by mountains. To thwart reinforcement, the Japanese plan included a simultaneous attack on Kohima. A successful attack on Imphal would delay any British move back into Burma and give the Japanese a forward base for attacks in India. If Imphal was captured it would create a solid defensive line for the Japanese.

The fighting took place in what is said to be the wettest place on earth. The strategy, aimed at a short decisive battle of three weeks, extended by several months.