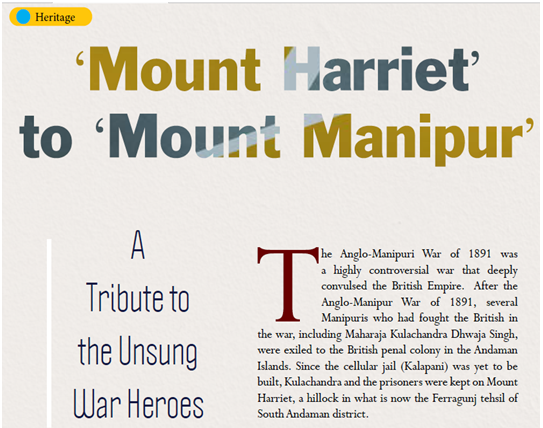 According to a British-era document from the Manipur State Archives, 23 men, including King Kulachandra and his brothers, were transported for life to the Andamans. While some died there, Kulachandra was released and shifted elsewhere before his death. The 23 are considered war heroes in Manipur. That is why Mount Harriet is an important symbol of the Anglo-Manipur War of 1891.

Manipur this season has got a reason to celebrate after the Centre renamed the Andaman and Nicobar Islands' 'Mount Harriet', as 'Mount Manipur' in the honour of Manipur's Maharaja Kulchandra Dhwaj Singh and 22 other freedom fighters who were imprisoned in the cellular jail also known as the Kalapani.

The announcement was made by the Union Home Minister Amit Shah while he was addressing a public function at Port Blair in Andaman and Nicobar Islands. The Union Government also announced that it will assist the Manipur state government in constructing a memorial site at Mount Manipur in Andaman & Nicobar Islands.

Mount Harriet is the third highest peak in the Andaman and Nicobar Islands, and served as the summer headquarters of the Chief Commissioner during British Raj. It is believed to be named after British artist and photographer, Harriet Christina Tytler, who was the wife of Robert Christopher Tytler, a soldier who served in the British Indian Army. Between 1862 and 1864, Tytler was the superintendent of the penal colony at Port Blair.

District officials from South Andaman said Mount Harriet houses a colonial bungalow, which now functions as a forest guest house. Close by is the Mount Harriet National Park known for its wide variety of birds.

The significance of Anglo-Manipur War of 1891

In 1825, after seven years of occupation of the Tibeto-Burman kingdom of Manipur by the Burmese kingdom of Ava, the army of the East India Company and an army of Manipuri princes called the Manipur Levy joined forces to expel the Burmese. The subsequent Treaty of Yandabo of 1826 recognised the independence of Manipur.

The kingdom became a buffer state between the British and the Burmese. In 1834, under the regency of Crown Prince Narasingh, the Political Agency of Manipur was instituted by the British as a medium of communication between the East India Company and Manipur about the frontier between Manipur and Burma. The function of the Political Agent was dependent on the will and pleasure of the Maharaja of Manipur. British records described him as a British officer under Manipur surveillance.

The 1850s and the 1860s, however, saw a series of succession wars after the death of the popular and able Maharaja Narasingh in 1850. The instability led the British to provide a unilateral guarantee of protection of Manipur in 1865 by declaring Maharaja Chandrakirti Singh as an “Asiatic power” in alliance with the Queen of Britain.

In 1874 Chandrakirti and Lord Northbrook, Viceroy of India, reaffirmed the Anglo-Manipuri treaty of 1833. In 1886, the powerful and friendly Chandrakirti died and the British annexed Upper Burma as well. The weakened Manipur’s importance as a buffer state for the British came to an end. But the kingdom remained strategically important as it was located between Burma and Assam, two important possessions of the British Empire.