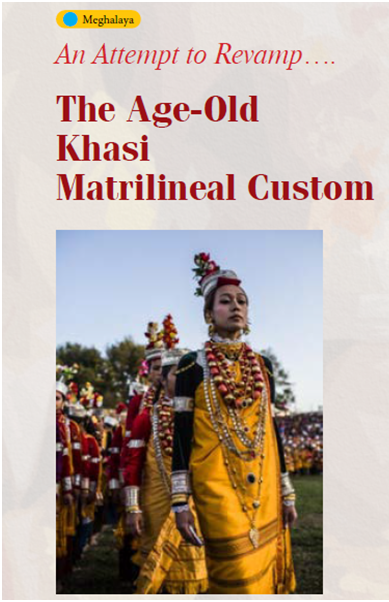 Northeastern Meghalaya state, the Khasis have been considered the best example of a society where women are called above men. In a state of around 3 million people, the Khasis constitute nearly 35% of the population and together with the Jaintia and Garo tribes follow the matrilineal tradition. Khasi are an ancient tribe said to be the "largest surviving matrilineal culture in the world. The matrilineal tradition which the Khasi and other subgroups practice in Meghalaya is unique within India. Matrilineal principles among the Khasi are emphasised in myths, legends, and origin narratives. Khasi kings embarking on wars left the responsibility of running the family to women and thus their role in society became very deep rooted and respected. Reference to Nari Rajya (female kingdom; or land of matriarchy) in the epic Mahabharata likely correlates with the Khasi and Jaintia Hills and Meghalaya's present-day matrilineal culture.

Women have a dominant role in the matrilineal society of Meghalaya. The youngest daughter of the family, the Ka Khadduh, inherits all ancestral property. After marriage, husbands live in the mother-in-law's home. The mother's surname is taken by children. When no daughters are born to a couple, they adopt a daughter and pass their rights to property to her. The birth of a girl is celebrated while the birth of a son is simply accepted. There is no social stigma attributed to a woman remarrying or giving birth out of wedlock as the "Khasi Social Custom Lineage Act" gives security to them. They enjoy total security, unlike in the rest of the country. A successful career women of the Khasi society feels that "their societal anomaly" has enabled her to be successful in every way. Most small businesses are managed by women. The youngest daughter of this society who inherits the ancestral property holds a pivotal role of looking after the welfare of her parents in their old age, as well as the welfare and education of her siblings. Custom also dictates that the khatduh cannot sell the property, without permission of her maternal uncle. Women activists have often pointed out that custodianship is often misconstrued as ownership by the youngest daughter.

Some Khasi men perceive themselves to be accorded a secondary status. They have established societies such as the Syngkhong Rympei Thymmai (SRT)(3,000 members) and Sam Kam Rin Ku Mai (Societal Restructuring Association) to protect equal rights for men. They express that "Khasi men do not have any security, they do not get much chance to own land, nor run the family business. On the other hand, over the years, a few groups have protested the system of property inheritance, saying it “disinherits” men, and are pressed for equitable property distribution between all children in the family.

A district autonomous council in Meghalaya is attempting to modify a customary practice of inheritance of the Khasi tribe in which the youngest daughter of the family is bequeathed the full share of parental property.