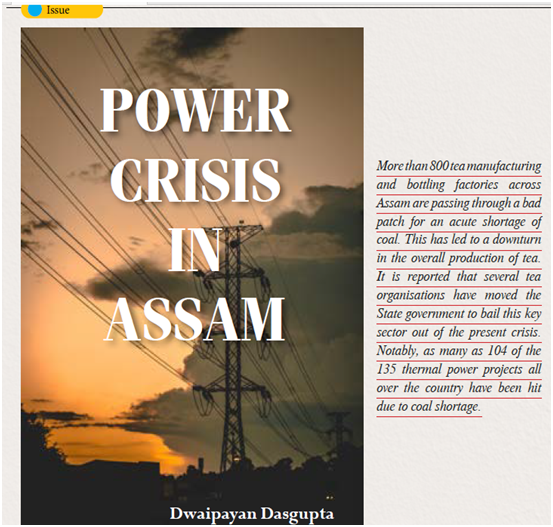 There is no denying that Assam is the most productive of all other States in the Northeast region of our country. But in spite of it, the State has not been able to emerge as a powerful economic power in the country due to its major problems retarding the process of development in the State: the twin issues of intractable floods and erosion, rising prices, burgeoning unemployment and power crisis. But at present there is no major issue in the news radar excepting for power crisis.

One prime reason for many tea production and bottling units in Assam to face the acute shortage of coal is their dependence on coal as the prime source of energy for various activities. It is reported that the tea factories and bottling units in Barak valley and middle Assam need a huge amount of coal annually. But its supply from the local sources has dropped sharply during the monsoon season. The resultant acute shortage has compelled the factory owners to import coal at higher prices from the neighbouring States, Meghalaya and Arunachal Pradesh.

It is important to note here that the coal shortage is not confined to Assam alone. It is today there even at the national level. Actually, the nationwide energy crisis has deepened it in Assam. Its failure to become self-reliant in power-generation has made it solely dependent on the Centre for power. Any shortage of power at the central level will therefore impact the state supply position. Of late, what triggered power crisis in Assam for a couple of days during the Durga puja festival was a combination of factors such as excessive rainfall in coal belts and coal-based power plants generating far less than their capacity because of high production cost. The Central Electricity Authority (CEA) reportedly warned that coal reserves at half the country’s power plants ‘could be empty in three days or less because the post-pandemic a surge in production resulted in a growing demand for power.

That the power situation in Assam during the Durga puja as far from satisfying was evident from the Assam Distribution Company’s notification that the country-wide coal shortage could lead to power shortage in the State. It is reported that the crisis had actually resulted from a fall in the import of coal by private power producers for their thermal power stations due to increasing prices of coal in the international markets and domestic coal production hit by excess rainfall as stated above. The daily average coal requirements in power plants about 18 lakh tonnes. But the average daily coal supply is about 17.5 lakh tonnes per day. As the country faced an acute energy crisis due to shortfall in coal, the APDCL was forced to buy power at prices more than double the usual rate during the festive season.