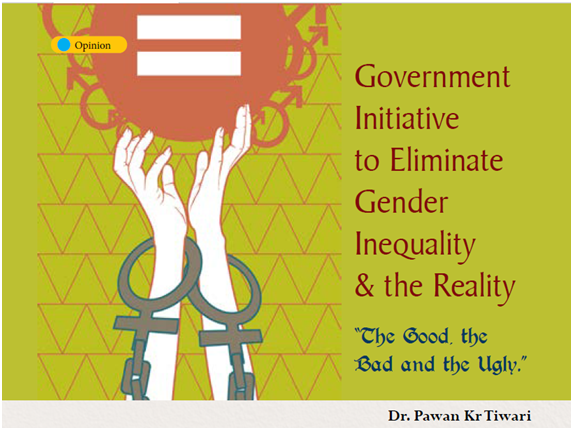 We worship Goddess Durga, Goddess Laxmi, Goddess Kali and many other goddesses but on the other hand we are denying equality to the women. We pray to Goddess Durga who is the symbol of shakti – a feminine form of power but at the same time witch hunting, rape, sexual abuse, domestic violence against women etc are going on in our society. Is it not hypocritical to worship Devi Durga, if we believe women are inferior to men in real life?

It's an irony that a society that worships Goddess Durga, who embodies Shakti, or the feminine form of power, is actually dominated by males and women have to bear the brunt of their atrocities.

It is ironic that even though we worship feminine power in the form Ma Durga and other goddesses, the position of women in our society is pitiable. Crime against women, especially female foeticide, child marriage and domestic violence, is on the rise. Crime against women has become a common and pervasive phenomenon. Women are not safe even in the capital cities.

It is to be noted that when Mahisasoora threatened the kingdom of god, when he wanted to establish a kingdom of devil, all the Gods were unable to fight against him directly. The supreme powers merged together and formed a shape of a young Goddess, who was empowered with eternal power, three eyes and ten hands with a celestial weapon in each, mounted on a lion with an awesome power. Her exquisitely beautiful look with glowing face and wide-open eyes added a special glory to her personality. She was the one and only one in the whole universe who could abolish the evil power by killing Mahishasoora. She was named “Durgathe Naasini” or “evil destroyer”.

She became the Goddess of war, unbeatable lord of power and symbol of goodness. Durga means “unattainable” in Sanskrit. She is also known Mahishasura Mardini, because she was the only power to kill Mahishasura. She is Maha Devi, the Great Goddess, who is treated as the Mother of all mortal beings as well as the divine powers. Durga puja is celebrated in almost each and every state in India. But gender disparity is found everywhere. The declining ratio of the female population, in the last few decades is a proof of this. The stereotypical image of a woman haunts her everywhere. Domestic violence is pervasive in almost every society. The underlying causes of gender inequality are related to the socio-economic framework of India. As a result, the women belonging to the weaker sections of the society i.e. the Scheduled Castes/Scheduled Tribes/ Other backward Classes and minorities, do not have easy access to education, health and other productive resources. Therefore, they remain largely marginalized, poor and socially isolated.

Gender equality implies a society in which women and men enjoy the same opportunities, outcomes, rights and obligations in all spheres of life. Equality between men and women exists when both sexes are able to share equally in the distribution of power and influence; have equal opportunities for financial independence through work or through setting up businesses; enjoy equal access to education and the opportunity to develop personal ambitions. Most of the women works remain invisible.  Much of women’s work never appears in the national statistics because it is regarded as their necessary household works rather than rewarding activities. Thus women participate in a variety of economic activities but most of their works are not counted as their contribution. Women are also not treated as equal partners in political activities. Women are regarded as followers. The male dominated society does not think that women are also capable of playing leading role in political activities.