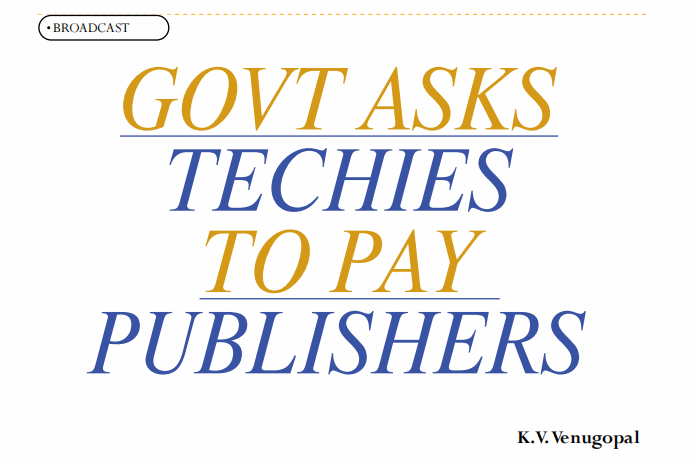 The tech majors were shell-shocked when the Central Government recently announced that they are bound to pay Indian newspapers and digital news publishers’ a share of revenue for using their original content. It is pertinent to note that Google, which also owns You Tube, Facebook, Instagram and WhatsApp owned by Meta, besides, Microsoft, Apple, Twitter and Amazon are forced to follow the order of the government.

Recently, the minister of state for IT and Electronics, Rajeev Chandrasekhar, while announcing the government’s decision said that the, “The market power on digital advertising that is currently being exercised by the Big Tech majors, which places Indian media companies at a position of disadvantage, is an issue that is seriously being examined in the context of new legalisations and rule”. It is perhaps the first official statement by the Indian government on plans to make the global internet giants pay for using news or information generated by independent news and publishing outlets. Importantly, the Indian government wanted to implement it after observing a decision taken by Australia within the European Union.

The concerned minister reiterated that the move was being mooted through regulatory interventions, which may happen as part of revisions to the existing IT laws. The global digital and social media platforms have gained immense advantage from the rapid speed at which internet and smartphones had spread, apart from managing to generate advertising revenue and an increase in circulation figures and viewers for both print and video. The print media and digital news publishers assert that the increase in growth is mainly due to original content filed and paid by them.

Sources in the government circle opine that the growth of social media and tech platforms have paved way for consolidation of market power, but it benefited only a handful of big tech companies, thereby leaving a large number of the original content creators in the lurch. The government is only attempting to render a natural justice to the affected people, as the news publishers virtually have no negotiating leverage at all. Under the circumstances, the delicate issue needs to be tackled not only judiciously, but legislatively, too, says Chandrasekhar with supreme confidence and in a crystal-clear manner.

It may be recalled that the sensitive matter has been raised by the Digital News Publishers Association (DNPA) and the Indian Newspaper Society (INS) who have approached the supposed to be fair-play watchdog Competition Commission of India (CCI) against Google, accusing them of misusing its dominant position in news aggregation to impose grossly unfair conditions on new publishers. When the CCI hastened to order an enquiry against Google on the allegations that the producer or publisher of news which are made available in digital format, are not being paid a fair amount for their content, despite the tech company investing a huge sum for creating appropriate and meaningful content and news items for its subscribers and clients.

According to Indian newspaper and digital publishing bodies, various countries, including Australia, France and Spain, have passed legislation that requires tech companies, including Google, to adequately compensate producers for using their content and search results.