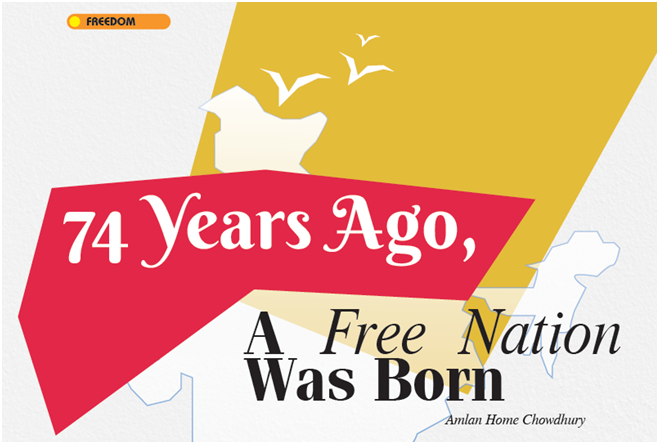 Perhaps the birth of no nation freed after remaining shackled for 200 years since the East India Company grabbed the land after defeating the last Nawab of Bengal Shiraj-ud-Doulla was so aptly described than in the case of India by its first Prime Minister Jawaharlal Nehru.

No doubt such a newly freed nation made a Tryst with Destiny 74 years ago at the midnight on August 15, 1947. This was the land that came under the British Crown from the hands of East India Company in 1859 under the Queen’s Proclamation.

Most justifiably, Pundit Nehru said "At the stroke of the midnight hour, when the world sleeps, India will awake to life and freedom. A moment comes, which comes but rarely in history, when we step out from the old to new, when an age ends, and when the soul of a nation, long suppressed, finds utterance...”

This really is a very interesting tale to tell as the foreign media, barring very few, did not find the birth of a free nation so much newsworthy to make it a big headline. They mostly treated the great event as an ordinary thing and even gave more importance to ordinary developments than this momentous issue.

Here, the superiority complex of the Western Power becomes very much evident. On the other hand, it was a moment of historic importance for the entire world, as a whole as it added a new dimension to the geopolitics of the South Asia.

They, however, treated this news on the front page but found many petty issues concerning their own country much more important than India’s freedom from the British Yoke.

End of the Raj and beginning of Swaraj did not interest the foreign editors much. But the Partition of India, border carnage and refugee influx did attract them.

Is not it interesting? Yes! Very much, indeed!

Here, we are giving excerpts from some of the newspapers of world on their reporting on August 15, 1947.

India celebrates as Britain Hands Over Control was the headline. Strange it may seem, this newspaper showed the Flag of Pakistan yet did not flash India’s Tiranga Jhanda: the Tricolor of the newly born state.

That daily gives single column treatment to the great news.