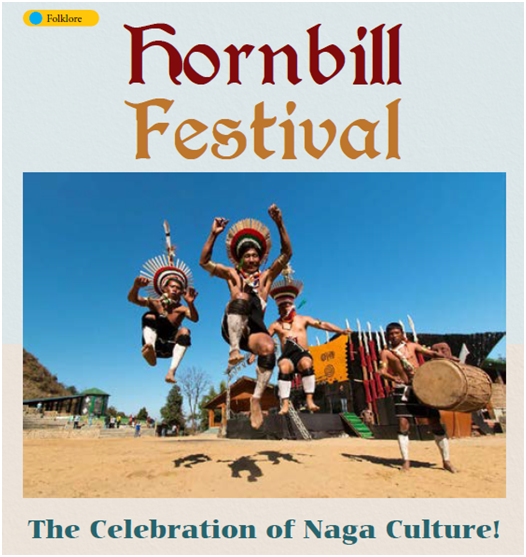 The Hornbill Festival is indeed the most renowned celebration of Nagas, where every year people of Nagaland gather in huge numbers for merry-making and frolic in the form of drinking, singing, dancing and relishing traditional cuisines of the state. Since its inception in 2000, the track record of the festival has been very successful. The Hornbill Festival has garnered global recognition with a recorded tourist footfall of over 3 lakh from all over the world. But for a year, the celebration was kept on hold, the reason being Covid pandemic around the world.

To our surprise! Hornbill Festival is making a comeback after a gap of one year this year. Recently a meeting was held under the Chairmanship of Neiphiu Rio, the Chief Minister of Nagaland to review the COVID situation in the state. The Nagaland Tourism Department had reached out to all Tribal organizations in the state, and had invited them to a meeting at the Directorate of Tourism Kohima. As a result, the Nagaland Government geared up to organise the Hornbill festival this year. This was officially announced by the Advisor, Tourism, Art & Culture, H Khehovi Yeputhomi during a coordination meeting for the Hornbill Festival with the tribal hohos on October 1 at the Directorate of Tourism, Kohima.

With the decline in coronavirus cases, it will be the 22nd edition of Hornbill festival this year starting from December 1.  The Hornbill festival will be held at the Naga Heritage Village in Kisama, located around 12 kilometers from the capital of the Nagaland, Kohima. This is a small village of Nagas in the state of Nagaland.

The significance of Hornbill in Naga Culture

As the name suggests, Hornbill is the name of a bird that has been depicted and respected by the Nagas for ages. The folklore and songs sung during the entire festival depict the importance of this bird.  The feathers of this bird were used to decorate the headgears of the people and warriors of Nagas. Initially, the government tried to persuade people not to hunt these birds and rather preserve them, but all of it went in vain. Due to extensive hunting, this species of bird reached the brink of extinction and that became an eye-opener for Nagas.

The Uniqueness of the Festival

This age-old festival is celebrated during the month of December every year in the state. Naga people have a rich tradition of maintaining their unique heritage and customs. The state is called the 'Land of Festivals' and people dwelling here have a fondness of celebrating the deeds of their ancient warriors and folk heroes.

In addition to their attractive and colorful traditional ceremonial attire, which is unique for each tribe, there are multi-colored spears, Dao’s with dyed goat’s hair and more.