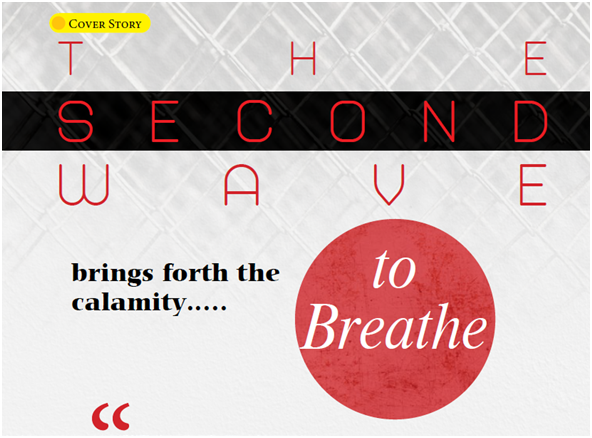 Dozens of hospitals in a number of Indian cities and towns have run short of the gas, sending relatives of patients scrambling for oxygen cylinders, sometimes in vain.

The Supreme Court directed the Union government to ensure 700 metric tonne (MT) of medical oxygen is supplied to Delhi, stating that even its judges feel “helpless” after hearing cries of people suffering due to shortage of oxygen, beds, and essential medicines in the national capital. It asked the Centre to submit a plan in the court detailing how this target would be met, including logistical details.

As per the opinion opined by the well-known journalists Vinod Dua, he has soughted the Delhi High Court remarks as the utmost disgrace to the Government.

Heused the Hindi word lanat meant insult to the Government. Indirectly, it meant the Government has clearly failed in implementing the necessary steps to control the pandemic.

Underlining that it is the government’s responsibility to provide oxygen to medical facilities, the Delhi High Court came down strongly on the Centre, saying it seemed that “human lives are not that important.. for the state”.

“Beg, borrow or steal. It is a National Emergency,” said the Division Bench of Justices Vipin Sanghi and Rekha Palli.

The court was holding a special hearing after Max Healthcare network sought its urgent intervention, saying that most of its hospitals were working on “dangerously low levels of oxygen supply”.

“As a state, you cannot say that look we can provide this much and no more, so if people die, let them die. That cannot be acceptable and that cannot be an answer of the sovereign state. We will have to enforce the fundamental rights of people and direct beg, borrow and steal and do whatever you have to do but you have to do. We cannot see people dying, because people are dying,” DelhiHigh Court.

On the Centre’s decision to exempt some industries from the ban on industrial use of oxygen, the Bench said: “You have your own state-run steel plants and petroleum industries. Why can’t you curtail it? Why can’t you stop it? Why can’t you minimise it to whatever is absolutely critical? We can understand that you cannot shut down petroleum production completely in the country because it is a critical thing by itself, but you can reduce it. We are sure that if you were to divert their oxygen for medical use, you would be able to meet the requirement”.

“There is no sense of humanity left or what. What are we looking at… This is really, really ridiculous. You’re concerned about industries at this point of time when people are dying in thousands. One week, two weeks, your industries can wait. It is an emergency of such a grave nature.

Saying that oxygen could be sourced even from industries which were producing their own supply, the court said: “If the result is that those industries have to shut down for some time, till you make alternate arrangements, so be it, because we cannot afford to lose lives. That is the bottom line”.

So with the above reference, it clearly means that the Government is not working with clarity. What could be more disgrace than this?

Oxygen therapy is crucial for severe COVID patients with hypoxemia — when oxygen levels in the blood are too low.

Experts say India is producing enough oxygen, at just over 7,000 tons a day. Most is for industrial use but can be diverted for medical purposes. The Indian government has now directed most of the country's supply of industrially produced oxygen toward the health care system.

Amid high demand, suppliers have been ramping up capacity to be able to produce more than 9,000 tons of medical oxygen by mid-May.

However, most oxygen producers are based in India's east, while the soaring demand has been in cities in the western and northern parts of the country.

Vikas Bajpai of the Progressive Medicos and Scientists Forum told DW that this is an extraordinary situation, and all government agencies must rise to the occasion. "The harsh reality is that the supply so far has been unable to meet the exponentially rising demand," he said.

To get the supplies where they are needed, Prime Minister Narendra Modi's government has launched "oxygen express" trains to ship the gas from production units to locations that need it nationwide. The Indian Air Force has also been airlifting oxygen from military bases.

Moving on to the reality for why the oxygen or vaccine is not available?

India sold twice as much oxygen to the world during the first ten months of fiscal 2020-21 as compared to the entire financial year before it, shows data from the Department of Commerce. This happened despite the fact that India was one of the three worst-affected nations from the coronavirus pandemic for a substantial portion of this period. Between April 2020 and January 2021, India exported 9,301 metric tonnes of oxygen across the world, earning Rs 8.9 crore from the trade. In contrast, the country had exported only Rs 4,514 crore during the financial year 2019-20, raking in Rs 5.5 crore.

Inspite of huge export, at present, India is facing the scarcity of oxygen cylinders.

Nevertheless, the country lacks enough transport and storage capacity. Liquid oxygen at very low temperatures has to be transported in cryogenic tankers to distributors, which then convert it into gas for filling cylinders. But India is short of cryogenic tankers.

"There are only a finite number of oxygen tankers and cylinders around. So, the logistics of refilling them and bringing them to the destination is a severe bottleneck," Meher Prakash of the Jawaharlal Nehru Centre for Advanced Scientific Research.

The oxygen shortage has been a huge problem not only in cities, but also in small towns and villages where the health infrastructure is already extremely weak.