India is a pool of beauty with brain. We have been bagging the titles of Miss Universe, Miss World and Miss Asia Pacific since years. The first of all was Reita Faria being the first Indian woman to win an international title. She was crowned ‘Miss World’ in 1966. Since then India has been winning the coveted title of Miss World. The Queen of Bollywood, Aishwarya Rai went on to win the ‘Miss World’ title in 1994 followed by Diana Hayden in 1997, Yukta Mookhey in 1999 and Priyanka Chopra in 2000.

After a long pause of 17 years, when the announcement was made “And the winner of the 2017 Miss World pageant is...Miss India Manushi Chillar”, it was celebration time for India. The news became a social media buzz and the whole country was overjoyed.

It was indeed a proud moment for us when 20 year old Manushi Chillar from Haryana was crowned ‘Miss World 2017’ on November 18, 2017 at an event held in Sanya City Arena, China. Miss World 2016 winner Puerto Rico’s Stephanie Del Valle gave away the coveted crown to Manushi. Stephanie Hill, who is Miss England, was the first runner up and Miss Mexico Andrea Mezabecame the second runner up.

Manushi studied at St Thomas School in New Delhi and is a medical student in Bhagat Phool Singh Government Medical College for Women in Sonepat. She was born on May 14, 1997 in Rohtak town,few kilometers from New Delhi, to Dr Dinesh Chillar, a government doctor in Haryana, and Dr Usha Chillar, an associate professor in Dermatology in Manushi’s medical college.

This gorgeous beauty has won the ‘Miss Campus Princess’ in her medical college, the Miss India World 2017 and ended her streak of wins by bagging the most coveted Miss World 2017 title.

Dr.Duyu Meena Mudang is the new face that proves that beauty does not fade with marriage after being crowned as Mrs India 2017 at Chennai in July. Born to DuyuSambyo and DuyuRinyo, she is from a beautiful place called Reru in Lower Subansiri District popularly known as Apatani Plateau of Arunachal Pradesh.

She is a homoeopathy doctor, successful entrepreneur, a mother and a wife. Meena, from a family of six, grew up in Reru in a close knit environment. Life has however not always been bliss for her as she faced many challenges while growing up, which moulded her into becoming the strong goalchasing woman that she is today.

From being Miss Subansiri 1997 to Mrs Arunachal 2010 to Mrs India 2017, here’s what Dr Duyu Meena Mudang has to say on her journey to be crowned as Mrs India 2017 with Chow Bilaseng Namchoom.

CBN: Every beauty queen has her own story to tell about her success in taking home the crown. Tell me yours?

DMM: Being the first one in the entire history of Arunachal Pradesh and the first Tribal Women from the entire Northeast India to win the coveted title of MRS INDIA 2017, was not easy as it is the most prestigious and largest national platform for Indian Married Women and also a gateway to the Premium International Pageants.

When I decided to take part in Mrs India 2017 beauty pageant, my journey started by giving online audition in the month of October 2016, after that audition for Northeast at Shillong on 10th December 2016, where I emerged as the winner and qualified for Semifinals, then next I had to compete with Northern states and West Bengal apart from Northeast states at Mrs India North 2017, which was held at Radisson Blue, New Delhi from 5th to 8th April 2017. From there, I was qualified for National Grand Finale which was held at Feathers Hotel, Chennai from 3rd to 5th July 2017, where I had to compete with all the 46 Winners of respective Zones from all over India and overseas to be finally crowned as MRS INDIA 2017.

The journey was really tough, very long and too strenuous but I could managed to bring home the most prestigious title and the crown of Mrs India 2017 which was possible because of my Husband Mr. Mudang Tacho.

Moreover, I had support from my in-laws, family and relatives and all the well wishers.

Thus, I moved ahead highly enlightened in my spirit and gave my 100% into it for which I thank God. 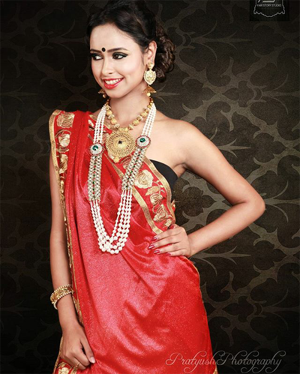 pageant held in Moranhat at Dibrugarh Assam. She is currently pursuing her studies in Arts. Tapasya, in an interview with Eastern Panorama,

What is Brahmaputra festival all about?

TC: Brahmaputra Festival is all about celebrating youth and deliberating talent from different parts of North East States of India.

Who was your inspiration?

TC. Preeti Thapa is my mentor and my biggest inspiration. She has supported me in the entire event as Godmother

What are your future plans?

TC. As for now my Future plans is trying for Femina Miss India and win the crown. I have started my preparations for it by building up my confidence, developing my skills and emerge as a strong personality.

What are your hobbies?

TC. I love to read novels, as they are carrier of knowledge and information.

Who is your fashion icon?

TC. My fashion icon is Miss Sushmita Sen. She has won Miss World at a very young age and was the first Indian and only Bengali to win the crown.

What is your fashion statement?

TC. I love to wear comfortable clothes as it reflects who I am and my personality.

Eastern Panorama had recently invited our esteemed guest Mrs. Sabina Parvez Warjri extending a cheerful Welcome on June 15 2017 obliging all our associates with her presence. We were delighted to offer the hospitable welcome we could. She was recently crowned as Mrs. Universal India at Delhi on 25th April 2017 competing with 26 participants from all over India representing their respective states making Shillong proud with her achievement. Being an inspirational woman to all, playing different roles so elegantly as a doting Mother of two daughters Zara and Aliyah, a glorious wife to Parvez Sharif, she is also, professionally a businesswoman of Zara Residency Hotel at Keating Road in Shillong.

Justin Timberlake and Jessica Biel are engaged! Timberlake, a six-time Grammy winner, popped the question to the New Year’s Eve actress last month. The couple is notorious private and rarely even photographed together - it took weeks for news of the proposal to be confirmed.

After a brief three-month split in 2011, Biel made it clear that she wanted to spend her life with Timberlake, who apparently felt the Add a comment Read more: Glam Gossip


Did Tom Cruise Pay 200 People To Pretend To Like Him

Reports out of Mumbai are suggesting that Paramount Pictures paid a mere $600 bucks to boost Tom Cruise’s ego. It seems not enough people were planning to show in the city, where Tom was slated to promote his latest movie, Mission Impossible: Ghost Protocol.

So the studio shelled out $$$ to get some really enthusiastic fans!