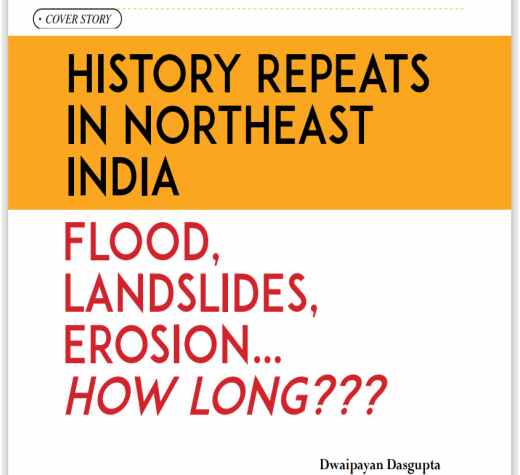 With the unprecedented climatic condition in the whole of the Northeast India, Assam with its vast network of rivers is very susceptible to such natural disasters as the twin problems of flood and erosion, which have over the decades slowed down the process of developmental activities. These problems are so complicated that in spite of sustained efforts of the successive governments both at the centre and State to find out a long-term solution, they still remain elusive.  It is to be noted here that these two problems of Assam are singularly distinct in several ways from other States in the country, that is as far as frequency, duration, enormity of damage  by deluge, and extent of river-bank erosion is concerned. Due to Assam’s unique climate and frail geology, the State experiences endemic flood, bank-erosion and other natural calamities such as landslides, earthquakes, during the monsoon season almost every year. But what has happened to Assam days before is something heart-rending. In other words, the first wave of floods has hard- hit the State earlier than usual time. Its early arrival has naturally taken the administration and thousands of families by big surprise. With a perceptible weather change in the North-East India, against high temperature in summer months, rainfall is a welcome major break from scorching heat. But this time the story is just the other way round. The situation worsened when there was incessant rainfall at a stretch in the preceding week under the influence of Cyclone ‘Asani.’

Torrential rainfall has caused high floods in as many as 32 districts in Assam, as per a media report in the month of May. The districts which have been adversely-affected by floods include, Cachar, Dibrugarh, Jorhat, Dhemaji, Dhubri, Bongaigaon, Hojai, Nagaon, Kokrajhar, Karbi Anglong, Kamrup(M) and Biswanath districts among others. On the contrary, few districts, Karimganj, Hailakandi and Dima Hasao are hit by heavy rainfall-induced landslides. Among them, the worst-affected has been the hilly Dima Hasao district. With the heavy landslide, the new Haflong Railway station, depressingly, lies buried under debris from mudslides. Amazingly, amid the large-scale destruction triggered by the killer landslide, the now-abandoned over-hundred-year-old British-built metre gauge railway line  still stands unimpaired.  But, the recently-constructed broad gauge track and the four-lane highway lie in a ramshackle condition. This suggests that the huge construction works were undertaken, possibly not caring much about the basic need of honouring the existing eco-system of the hilly district and in consequence, it has taken a massive hit in Nature. As has been reported, the recent devastating landslides in Dima Hasao district, as per one count, have damaged its basic infrastructure to the tune of a staggering amount of Rs 1,000 crore. To repair the damage, the State Government will reportedly seek financial help from the Centre.

However, according to a media report of May 21, a total of 8,39,691 in 3,246 villages in 32 districts of the State have been affected and the total area of cropland affected has been 1,00,732 hectares. The devastating pre-monsoon first wave of floods has claimed 13 lives, and the landslides five, besides snapping road communication at different vulnerable places. This year’s ravaging deluge is reminiscent of the July 2020 ravaging Assam flood which affected 12,97.241 people and inundated 82,546,82 hectares of croplands in as many as 24 districts among others, Dhemaji, Lakhimpur, Biswanath, Sivasagar, Dibrugarh, Majuli, Barpeta, Dhubri, Goalpara etc. In the flood-waters, the total fatalities across the State rose to 44. It is, however, a proven fact that since the greatest earthquake of 1950, almost every year several waves of flood, particularly rainy season,  bring untold sufferings to the people of Assam.  A thorough study revealed that as in 2014, in 2015 too, flood turned out to be far too devastating and heart-rending given the magnitude of the sufferings of the people. To exemplify, even the first wave of flood that year, it rendered a close to 3.11 lakh homeless in 702 villages of 15 districts. Among the towns, the worst-affected was Barpeta because as many as 91,000 people suffered under its impact.