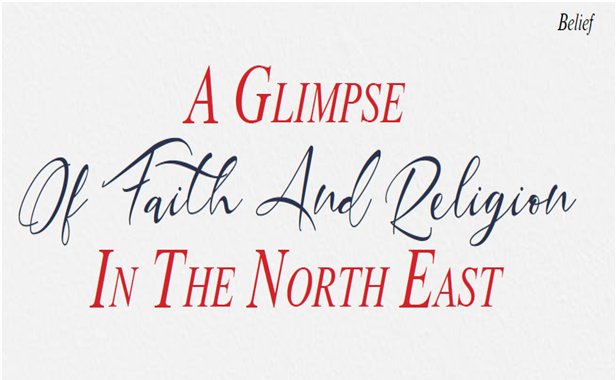 North East is a cauldron of various cultures, faiths, traditions and customs. It constitutes an amazing rainbow of faiths and rituals. What is called indigenous faith is in fact the original faith of our people during the less scientific civilizations. Their pristine closeness to nature, their unflinching beliefs in the different spirits that govern their life is a priceless treasure of our country. We may call their faith either Animism or Pantheism which is indeed a vital offshoot of Sanatana Dharma. The North East now comprises eight states, each having its distinct history, a well defined geography, a vibrant culture and much valued traditions. An attempt shall be made here to look a bit more closely at some of the faiths, its associated rituals as practiced by our people for centuries inhabiting the remote, far flung areas of our country. Most of them still live in close proximity with nature untouched by the mad waves of materialism. Pantheism or Animism remains their invisible guiding spirit, silently inspiring and shaping their life from birth to death.

Before over viewing these faiths and beliefs, let us look at what these two terms stand for. Religion and Faith are not contradictory, rather complementary, the offshoots of man's innate urge to commune with the divine, to know the unknown, the One who has created us as well as the planet on which we dwell in. But these two terms cannot be defined without ifs and buts because what is Infinite cannot be comprehended by the finite. How beautifully Robert Browning puts this idea in his poem "Two in the Campagna" where he says in its concluding lines,

"Infinite passion, and the pain of finite hearts that yearn". Indeed very true. The finite cannot comprehend the Infinite.

Religion particularly Hinduism is a way of life. Former President Dr S Radha Krishnan very pertinently states that it "is more a way of life than a form of thought'. The importance of religion has been very succinctly mentioned by Will Durant that "the soul of a civilisation is its religion, and it dies with its faith". Jonathan Swift in his characteristic ironical style mentions that "we have just enough religion to make us hate, but not enough to make us love one another'.  Perhaps St Augustine is more equivocal when he writes that "Faith is to believe what we do not see and the reward of this faith is to see what we believe'. With these diverse opinions, it will suffice to say that religion and faith both are vital for the survival and happiness of human life. While religion generally is structured, faith remains immensely personal. It pumps greater self confidence into our life, injects fresh energy to sustain through the rough weathers. Faith does not connote a mechanical adherence to authority. In fact it considerably influences our inner faculties, humanizes our nature, and lifts us to a higher level.

Let us look at some of the tribes inhabiting Arunachal Pradesh. It is a state with majestic mountains and vibrant valleys engulfed with luscious greenery. Each of the tribes zealously guards their own customs and rituals. Kaling Borang in his informative article entitled "I am a Doonyipooloist" published in the book" Socio Cultural and Spiritual Traditions of North East Bharat" admits that his faith  is handed down to him by his forefathers. He practices Doonypooloism but he is not sure what to call it, these bunch of divine thoughts, a handful of inspiring rites and rituals. Should he call these… Faith? or Religion? Such frankness and dilemma reflect a   candid simplicity that can come only from one who has been living in close proximity with nature. Mr Borang is from the Adi tribe, a sub tribe of a larger community called Tani. Their core god is Doonyipoolo under which there are numerous gods and goddesses and deities. The essence of this faith is the belief in oneness of all human race, and festivals are the gifts from gods and goddesses. There is no hell in their belief system. They spot divinity in every object of the planet.

According to LKhumin  in his article entitled Philosophy and Spirituality of Rangfraism  published in the book, ‘the Nagas’ who are settled in Tirap and Changlang districts of Arunachal Pradesh follow certain customs and what they believe is called Rangfraism. It is also practiced by some other ethnic groups in Myanmar particularly the Tangnu and Shangnu tribes. Despite their conversion their social and cultural life still retains some of the ancient customs.  Rangfraism is nature's manifestation of God. Nature the objective manifestation of God is called Rang. and feelings and thinking like love, compassion, honesty etc are called Fraa  and these  are also the embodiments of divinity. Five fundamental cosmic elements constitute the universe which includes matter, energy, space, etc. similar to Sanatana Dharma's concept of Universe comprising five elements:  earth, water, sky, fire and air.

The Adis have various sub tribes like Minyong, Komkar, Tangam, Pasi etc occupying the central zone of the state. These sub tribes too have distinct rituals for example birth in the family is considered a new beginning of the divine soul and death is also regarded as a new beginning of the divine soul in its journey to the next birth of the same soul.

Apatanis a major tribe of Arunachal Pradesh inhabit the Ziro valley, now the   headquarters of Lower Subansiri district. Adis is also a sub tribe of a larger tribe called Tani. They are concentrated mostly in the central parts of the Siang District and some parts of Lohit District. They are the descendents of Abotani and worship Danyipilo symbolising the Sun and the Moon.