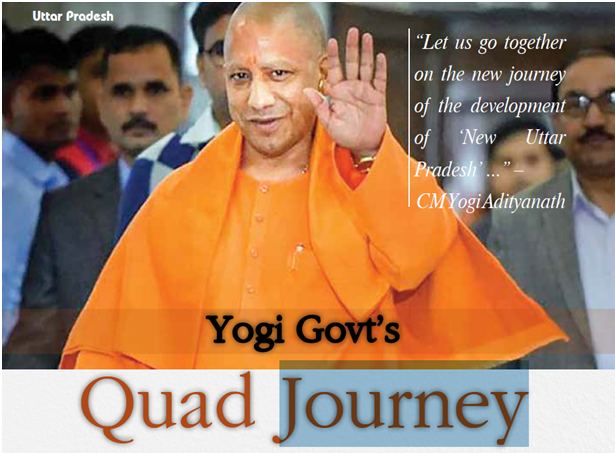 With much hype and fanfare, Uttar Pradesh Chief Minister Yogi Adityanath completes four years in office on 19 March and he has a long list of achievements, to claim, but his government faces several challenges on various fronts ahead of the 2022 Assembly Elections in Uttar Pradesh.

A 64-page booklet titled “Chunotiyon main talaashe avsar” (Challenges turned into opportunities) has been brought out listing the achievements of his government in various fields in the “four years of service and good governance”.

Besides referring to the presentation of its first paperless budget (2021-2022) with largest ever size of Rs 5.5 lakh crore for all round development of Uttar Pradesh, the booklet list efforts to make the state a trillion dollar economy and bring about improvement in law and order situation, among major achievements.

“Uttar Pradesh is ahead of other states in the country in implementation of 44 developmental schemes… this record of development has been achieved when the world is fighting Covid-19. By making arrangements for controlling Covid-19, the state turned this challenge into an opportunity,” it says. Even the World Health Organisation has appreciated the state’s Covid management. Despite of being largest population in India and hosting largest number of migrants during Covid, it made elaborate arrangements and provided basic amenities including transportation.

It claims that the state’s GSDP has gone up in the last four years from Rs 10.9 lakh crore to Rs 21.73 lakh crore, taking the state from the tag of ‘Bimaru” states to ' Kamau' state (earning state) and proved to be the second largest economy in the country.

It says, the per capita income has doubled. It quotes a report of Centre for Monitoring Indian Economy (CMIE) to make a point about the rate of unemployment coming down from 17.5 per cent to 4.1 per cent in the state. It says the state government had adopted zero tolerance towards criminals and Mafiosi, and their illegally accumulated assets worth about Rs 1,000 crore have been demolished or confiscated. It said work on metro rail project has already started, while Meerut is soon going to get a gift of metro rail. Light metro will soon be launched in Gorakhpur, Varanasi, Prayagraj and Jhansi.

The Chief Minister is making all out efforts that the major development projects are completed in next few months. He reviewed progress of expressway projects and launched drinking water projects for Bundelkhand region in recent weeks. The state government will, however, have to further expedite action and closely monitor the progress of projects close to his heart before the state goes into poll mode in the next few months. “The Yogi government has performed well in the past four years. There is no doubt that UP’s performance has been better than other states in various sectors. The state government is working for all sections of society. In recent months, the Ram temple construction has begun and led to a positive mood among the people”.