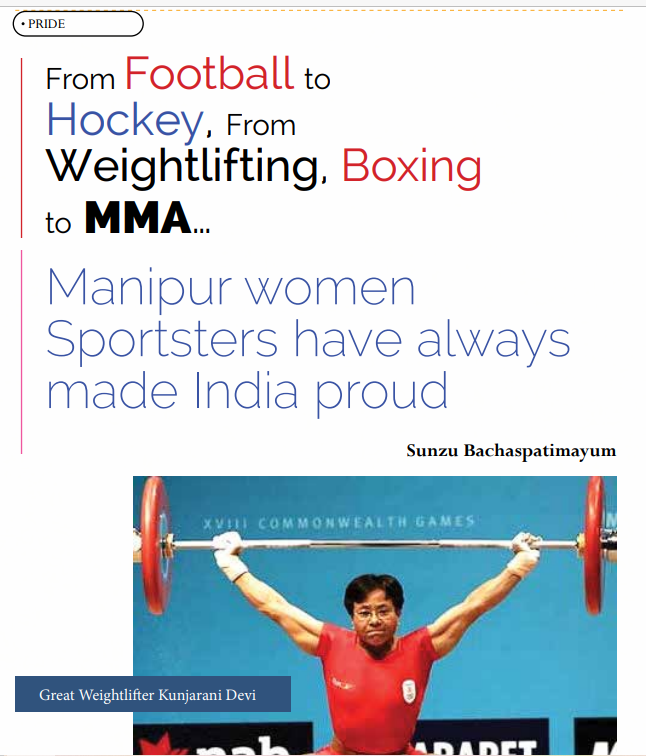 In Sports, the tiny state of Manipur has always made India proud. What is even more remarkable is the astonishing rise of Manipuri women in Indian Sports. From Saikhom Mirabai (weightlifting), Mangte Chungneijang Mary Kom (Boxing), Ngangom Bala Devi (football), Pukhrambam Sushila Chanu (Hockey), Laishram Bombayla Devi ( Archery) to Mix Martial Arts sensation, RK Jojo Devi, these amazing Manipuri ladies have awed us all with their skills and dedication and winning streaks, keeping the Indian tri-color flying high in the international sporting arena. To top it all, two of these achievers, MC Mary Kom and Saikhom Mirabai Chanu have delivered Olympic medals for India, a bronze and silver respectively.

This outstanding performance is not by random and chance. It happened with training, hard work, perseverance, dedication and the in-born killer instinct that all these women from Manipuri have.

The forerunner of this phenomenal rise of Manipuri women in sports is of course Nameirakpan Kunjarani Devi, the Aruna and Rajiv Gandhi Khel Ratna awardee. Kunjarani proved to herself as well as the rest of the women in India, particularly in Manipur that the petite size and gender is not a hurdle to achieve sporting glory in the international arena. After dominating the Indian women weightlifting scene since 1985, winning the top medals and creating national records, she clinched three silver medals in her first world championship held in Manchester in 1989, making her a sensation especially among young girls, inspiring them to dream of their own glory. Kunjarani’s best performance came in 1995 in South Korea where she won two gold and a bronze in the 46-kg category.  Following her footsteps, Manipur showed a number of women taking up weightlifting like Anita Chanu, Sanamacha Chanu, Ngangom Soniya, Sanjita Devi and finally the current sensation, Saikhom Mirabai Chanu, a talent spotted and groomed by Anita Chanu (now coach).

Mirabai is the second Olympic medalist from Manipur and the second Indian woman to win Olympic silver in weightlifting. She lifted her way to second place in the women’s 49-kg at the Tokyo 2020 Olympics. In the 2020 Asian Championship, in the clean and jerk, Mirabai Chanu set a new world record in the women’s 49-kg weight lifting 119 kg, making her one of the greatest weightlifters in history.

The iconic MC Mary Kom, is the first Manipuri athlete to win an individual Olympic medal when she boxed her way to clinch the bronze medal in the flyweight category in the London 2012 Olympic Games. A recipient of several prestigious titles and awards including the Padma Vidhushan, Padma Bhushan, Major Dhyan Chand Khel Ratna, Padma Shri and the Arjuna Award, Mary is currently a nominated MP Rajya Sabha in recognition of her sporting prowess.  She has six world championship titles, five Asian Championships, a Commonwealth Games Gold medal and an Olympic Bronze under her belt.