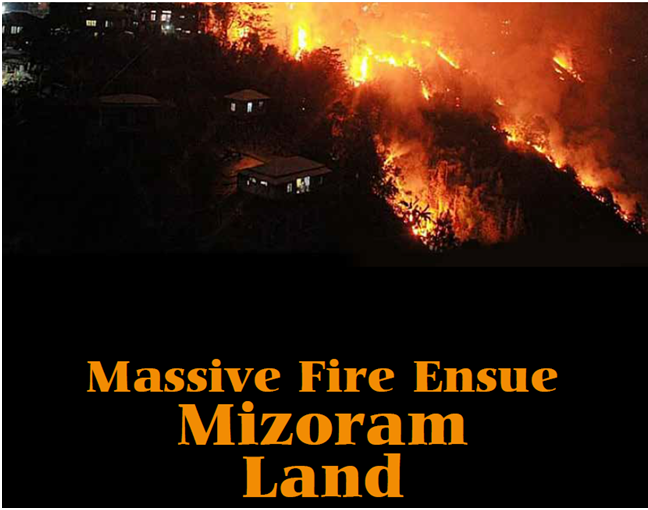 Mizoram located in the Northeast part of India is known for its highly literate agrarian economy. The term Mizoram is derived from two Mizo words-Mizo and ram. 'Mizo' is the name used to call the native inhabitants and 'Ram' means 'land'. Mizoram is a land of rolling hills, valleys, rivers and lakes. As many as 21 major hill ranges or peaks of different heights run through the length and breadth of the state, with plains scattered here and there. About 76% of the state is covered by forests, 8% is fallows land, 3% is barren and considered uncultivable area, while cultivable and sown area constitutes the rest.  Slash-and-burn or jhum cultivation, though discouraged, remains in practice in Mizoram and affects its topography. The State of Forest Report 2017 states that Mizoram has the highest forest cover as a percentage of its geographical area of any Indian state, being 86.27% forest.

But recently, there has been a massive fire in the state, damaging most of the forest area, or can be said incurring an incredible loss of the nature and obviously for the natives of the state. Massive forest fires broked out in the early morning of 24 April and continued to rage for more than 3 days affecting several parts of Mizoram and damaged vast tracts of land. The forest fire reportedly broke out at Saisih forest area in the outskirts of Lunglei and spread to Lunglei town the other day. While Lunglei is the worst affected, Serchhip, Lawngtlai and Hnahthial were also hit by the blaze as firemen deployed in several sites struggled to douse the flames.

According to a satellite data assessment by the Forest Survey of India (FSI), there were as many as 2,671 forest fire points in the state between April 20 and 26, with over 400 points the following day alone. NASA’s Earth data website also showed a very large concentration of fires in and around the state.

According to the Indian Meteorological Department (IMD), the states of Mizoram and Tripura recorded the “large deficiency” in rainfall during the pre-monsoon period from March 1 to April 26 at 74% and 67% below normal.

“There were over 400 forest fires. Several factors are being said to be the cause of the fire. Sunil Chandra, Deputy Director (Forest Geoinformatics Division) of FSI, informed that-

·         The (forests) have large bamboo plantations and bamboo leaves are highly inflammable. When there is less moisture and high fuel load in the form of dry leaves and twigs on the forest floor, fire catches easily and spreads rapidly.

·         A major part of rural Mizoram practices Jhum cultivation, the slash-and-burn method of farming, which involves clearing a piece of land and then burning it, in a bid to make it more fertile for cultivation thereafter. Many times, the wind carries inflammable material to adjoining areas, which causes them to catch fire.

·         Mizoram has very good forests. During this dry season, certain manmade factors may have led to extensive fires.

However, the actual cause of the fires is still to be ascertained.

Firefighters from the state government, with the help of Assam Rifles and Border Security Force personnel and local volunteer groups have tried hard to put the fire out, authorities said.

The Indian Air Force — requisitioned by the Mizoram government — deployed two Mi-17V5 helicopters, equipped with specialised Bambi Buckets, to control it. This happened only after the Chief Minister of Mizoram Zoramthanga spoke to the Prime Minister of India Mr. Narendra Modi.