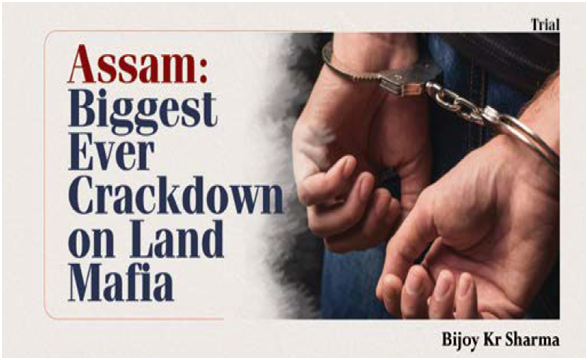 For the first time in Assam, civil administration and police went out to arrest the land brokers operating under the well-knit land mafia led to put as many as 520 land brokers behind the bar. The target list of land brokers were 700, but limited to 520, as many of them picked up were later found having no linkage with illegal land deal.

Land brokers across Assam not only grabbed the government khas land but also encroached upon satras, namghar, and debattar land of temples allegedly converting the name of individuals in connivance with circle and revenue officers.

Modus operendi of land brokers was simple as they first identified the land and start paying khazna to the district and sub-divisional revenue office and within very short span of time, patta was issued by the circle office with the help of nexus between land brokers and mandals, kanangu and mapis to individuals in exchange of huge amount of money, and same formula was also applied for grabbing the land of satras, namghar, debattar land of temples. This was going on since the day of independence of the country and its partition by the minority community of Assam, which left the indigenous people in dire straits particularly in minority dominated districts.

Since after BJP led government formed this year in Dispur on May, the Chief Minister Himanta Biswa Sarma very sternly categorically stated that his government is all set to make DTO offices, police stations, circle offices and DC offices free from brokers. Sarma also vowed to break all nexus with brokers as he knew that a section of officials even demands money for issuing death certificates. He said that the Police had arrested the land brokers who played a role in getting people’s works done against bribes, so he appealed the people not to go to any land brokers to get their works done in circle and revenue offices.

The Chief Minister opined that he had already warned all the officials in general and DTO offices, police stations, circle offices and DC offices in particular as this government has took the pledge to make the state free from corruption, middlemen and brokers.  It is now the people should severed the link and ties between them and middleman and devout their power for rendering services to the people”.

In Bail plea of all the alleged 24 land brokers arrested last month, were rejected by Dhubri Court. Land brokers were arrested during a statewide drive at instance of the Chief Minister, Himanta Biswa Sarma. A learned lawyer of Dhubri Court informed that while denying the bail of all 24 persons, the court opined that as submissions made by the learned APP, petitioners counsel and after having read them thoroughly of the case-diary, it has been observed that accused is yet to be framed in final sections. Moreover, in view of cases involving transfer of public land documents to amass money allegedly through deep rooted network, the court needed more time for further investigation into the cases. In addition the lawyer said, the sections of the law are initially registered on a prima facie reading of FIR so that a proper line of investigation can be initiated and thereafter, necessary materials against the alleged involved persons could be gathered.

As per court, “Further, after threadbare reading of the case-diary, it is seen that the investigation of the instant case has just been initiated and all necessary efforts are being made by the Investigation Officer (I.O.) to gather important documents and links so that involvement of other persons in the case could be ruled in. Also the present status of investigation reveals that the documents which have been seized from the residences and workplaces of the alleged accused persons are under proper scrutiny before the appropriate authority and many documents are yet to be recovered. This stage of the case would affect all the fruitful efforts of investigation which is going on in a very detailed manner. Also, some of the material witnesses are yet to be examined and involvement of some other persons is also ruled in as it appears from the case-diary”.

The bail petitioner accused person namely Aynul Hoque to go on bail. The said petition was supported by an affidavit stating that no bail petition is pending in any other Court.