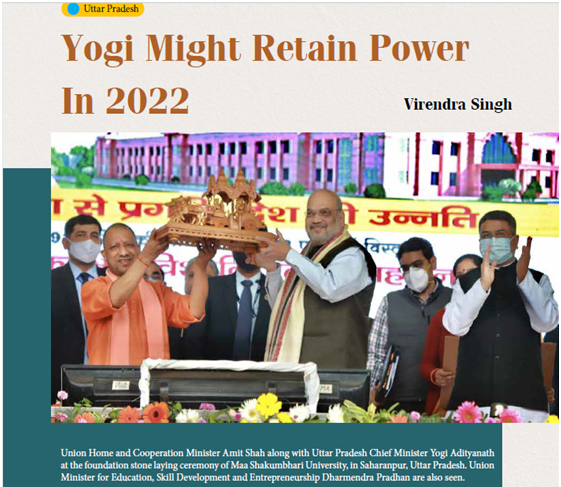 With the Legislative Assembly election in Uttar Pradesh in the offing of February/March 2022, the stage is all set for the crucial battle of bullets. With the disseminating developmental works to the people, the incumbent Bhartiya Janata Party is making all out efforts to retain the power. On the other hand, Samajwadi Party, Bahujan Samaj Party, Congress and other parties are burning mid night oil for polarisation of votes. No stone is unturned to turn the tide in their favour.

If everything goes well, it may be predicted that Yogi Adityanath might become the first Chief Minister of Uttar Pradesh to serve for the two consecutive terms, if the public opinion turns out to be true.

In the recent survey, BJP is projected to win 239-245 of the 403 seats, while the Samajwadi Party (SP) will finish as a distant second with 119-125 seats despite more than doubling its 2017 tally, as per the survey. The ​​BSP is expected to lose a significant share of votes. Thus, projections predict that ruling party BJP is all set to retain Uttar Pradesh with a comfortable majority in the upcoming assembly elections due early next year, as per Times Now-Polstrat opinion poll projects.

BJP is projected to win 239-245 of the 403 seats, while the Samajwadi Party (SP) will finish as a distant second with 119-125 seats despite more than doubling its 2017 tally, as per the survey. The BSP is expected to lose significantly and finish third with around 30 seats.

Congress could end up with five to eight seats, the survey shows, which is not very different from the seven it won in last election. The Yogi government’s hardline approach on law and order found some strong support in the opinion poll, and to a lesser extent, for its legal route to countering ‘forced’ conversions.

The opinion was more equally divided on the Citizenship Amendment Act, with nearly half of the respondents seeing the Yogi Government’s defence of it as an attempt to promote communalism. The poll suggests that BJP’s charge of 'Muslim appeasement' against SP and Congress has found some resonance among the respondents. The opinion poll was conducted dated between 6 to 10 in the month of November 2021 with a sample size of 9,000 respondents.

In the year 2022, election to the office of the President of India, by-elections to Loksabha, elections to the Rajya Sabha, and elections to the 7 state assemblies will be held in India. State Assemblies include Goa, Manipur, Punjab, Uttar Pradesh, Uttarakhand, Himachal Pradesh and Gujarat.