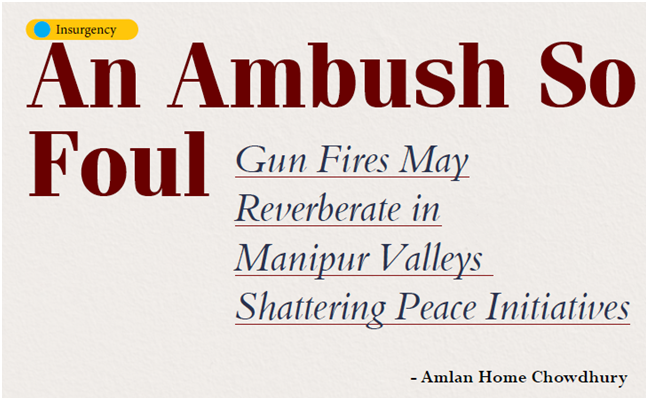 After remaining calm for quite some time, Manipur may again brace violence with reverberation of staccato sounds of gunfire as the latest intelligence reports say the People’s Liberation Army (PLA) likely to launch attacks before the coming February 2022 Legislative Assembly Polls.

This development takes place close on the heels of a foul ambush on a convoy of the 46 Assam Rifles on November 13, 2021 by the PLA resulting in the death of five army personnel and two civilians: the wife and minor son of the battalion’s Commanding Officer Colonel Viplav Tripathi.

Carried out by the PLA along with the Manipur Naga People’s Front (MNPF), this ambush indicates peace continues to remain fragile as the state’s separatist militants aim to perpetuate their terror with the support of China.

The factor of Red China comes in as Beijing had warned New Delhi in October, 2020 that it would promote armed separatism in Manipur and other states in the Northeast if India signs a trade pact with Taiwan which China claims as its own territory as part of its One China Policy.

This anti-India game plan further surfaced on October 18, 2021 when the virtual mouthpiece of Beijing Global Times published an article saying China would not allow India to play its Taiwan Card and promote the armed insurgency in Northeast if New Delhi goes ahead with it.

This ambush was unproved. The Counterinsurgency (COIN) Strategies of India also tried to establish peace in Manipur and other parts of the Northeast, the killing of seven persons by the PLA gives stronger steam to the factor of Chinese involvement in it.

On a single stroke, the Beijing-backed PLA- MNPF combine created a topsy-turvy in India’s peace plan and the latest reports say the security forces are being forced to “Rethink” on the plans to reduce troops under its COIN strategy.

In other words, the security forces are to scale up the counterinsurgency operations following this ambush. The chances of it further goes up as some armed insurgency groups in Manipur, Assam and Nagaland are yet to enter into ceasefire with the Indian Government.

Hence, they are likely to face armed security actions in near future which will create disturbances during the coming 2022 legislative assembly polls in Manipur. The election issue surfaces over the question of what actually prompted the PLA- MNPF combine to resort to ambush? Was imminence of polls a reason?

The security actions were not being carried out against them. Hence, the attack came largely unprovoked. Let us venture an answer. In fact, it is necessary as the PLA did not launch any attack on security forces after its last strike on June 4, 2018 when an Army convoy was attacked killing 18 army personnel.

Now back to the question of nearness of elections in Manipur and sudden, unprovoked ambush by the PLA- MNPF combine. It could have the following four plausible reasons: