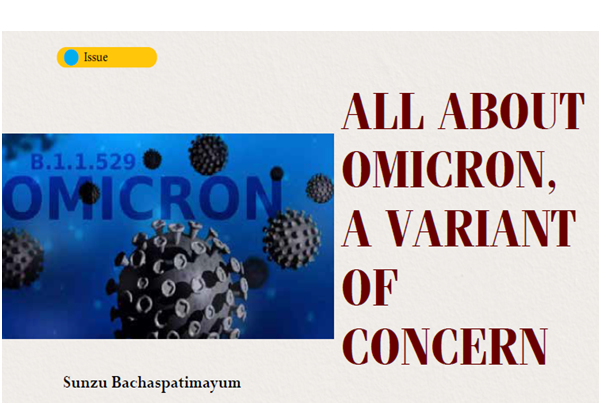 A new and potentially more transmissible coronavirus variant identified as the B.1.1.529 strain has sounded global alarm, raising concerns about what would be the next in the pandemic. The highly transmissible and infectious variant, now named Omicron, has been designated as a ‘variant of concern’ by the World Health Organization.

With only a few hundred cases reported across the globe, available data on symptoms and severity are sketchy at best. Technical experts from WHO and other world scientists locked in studying and monitoring the Omicron and countries across the globe are stepping up international travel restrictions as well as speeding up inoculation of its citizens.

India became the 30th country in the world to report Omicron, reporting two cases on December 2 in Karnataka. While one is a 67-years old foreigner who had travel history to South Africa and has left the country prior to his test result coming positive, the other is a 46-year-old male health care worker who had no travel history. Health Ministry's Joint Secretary Lav Agarwal while briefing media said that all people who came in contact with the two men have been traced and are being tested. He added that both the cases are mild and there are no severe symptoms so far. In the light of Omicron, Union government has advised the states to ramp up testing and follow strict restriction guidelines for international travellers to check omicron impact in the country.

While experts have deduced from the number of mutations that Omicron has risen from, that it is likely to be highly transmissible compared to other variants, including Delta, as epidemiologic studies are underway to understand it effectively.

Conclusion, whether infection with Omicron causes more severe disease compared to infections with other variants, including Delta cannot be drawn as yet.  Preliminary data indicates increased rates of hospitalization in South Africa. However, this would be due to increasing overall numbers of people becoming infected, rather than a result of specific infection with Omicron.  There is currently no information to suggest that symptoms associated with Omicron are different from those of other variants like body ache, severe head ache, and loss of appetite but no taste and smell are yet-to-be verified symptoms. Initial reported infections among youth suggest mild disease. Complete understanding the level of severity of the Omicron variant is being studied.  All variants of COVID-19, including the Delta variant that is dominant worldwide, can cause severe disease or death, in particular for the most vulnerable people, and thus prevention is always a key.

Effectiveness of prior SARS-CoV-2 infection

Preliminary evidence suggests that there may be an increased risk of reinfection with Omicron (ie, people who previously had COVID-19 could become re-infected more easily with Omicron), as compared to other variants of concern. Currently studies are on to prove it conclusively.

Widely used RT PCR tests continue to detect Omicron infection.  Studies are ongoing to determine whether there is any impact on other types of tests, including rapid antigen detection tests.

Corticosteroids and IL6 Receptor Blockers will still be effective for managing patients with severe COVID-19. Other treatments are being assessed to see if they are still as effective given the changes to parts of the virus in the Omicron variant.