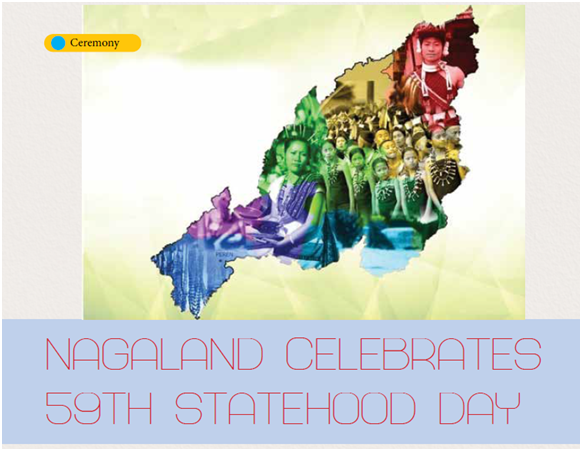 The 59th Statehood day was celebrated at Nagaland, Kohima on 1st December 2021. This year’s celebrations also coincide with the ongoing nationwide celebrations to commemorate 75 years of India's independence 'Azadi Ka Amrit Mahotsav' and the great achievements of its people. Close to six decades since Statehood, Nagaland has improved significantly with all round development in the expansion of health and education facilities comparatively.
The State occupies a unique position in the Indian Union with special provisions in the Constitution and as the wait continues for a solution of the Naga Political Issue, the dialogue and negotiations between the Government of India and the Naga Political Groups have reached a stage giving hope for an early resolution. Recently, all the elected leaders of the state have come together to form an opposition-less government in the form of United Democratic Alliance to facilitate an early settlement of the Naga Political Issue.
Chief Minister, Neiphiu Rio delivering his speech appealed to the people to rededicate and work for peace, growth and development, and provide better standard of living for all citizens. He emphasized on the need to further improve administrative and governance systems and added that the citizens have to join hands with the Government to usher in a new era of peace, development and prosperity.
Significance
This day is celebrated by remembering the struggle and sacrifice of Naga leaders who contributed in the formation of Nagaland as the 16th State of India. In previous years', parades, drills and air shows by the Indian Air Force have marked the occasion.
Due to COVID-19 protocols last year, the Nagaland Statehood Day was celebrated in a sombre manner at the Civil Secretariat Plaza in Kohima. Nagaland Chief Minister Neiphiu Rio took the general salute from a parade contingent and paid tribute to leaders who, through their determination and foresight, had ensured the formation of the state.
The uniqueness of Nagaland culture and talent of people is fully proven by the success of the Hornbill Festival- the festival of festivals, and the 21st edition of this festival has showcased the talents of youth in the spheres of art, music and other fields. To showcase tradition, culture and talents, the much awaited Cultural Hall was inaugurated with a seating capacity of 1850 and it will be one of the premier Cultural Halls in the country.
History
·         Nagaland was formally recognised as a separate state on December 1, 1963, with Kohima being declared its capital.
·         Before this, Naga leaders and the central government reached an agreement to create a separate region of the Naga Hills in 1957.
·         The State of Nagaland Act, 1962, was enacted by the Parliament to give Nagaland statehood.
·         According to the Article 371-A, no act of Parliament would apply to the State of Nagaland in a matter relating to religious or social practices of Nagas, Naga customary law and procedure, administration of civil or criminal justice involving decisions according to Naga customary law and ownership and transfer of land and its resources. Nagaland is the first state in the northeast to be bifurcated from Assam as the 16th State of the Indian Union.
Nagaland in the coming days...