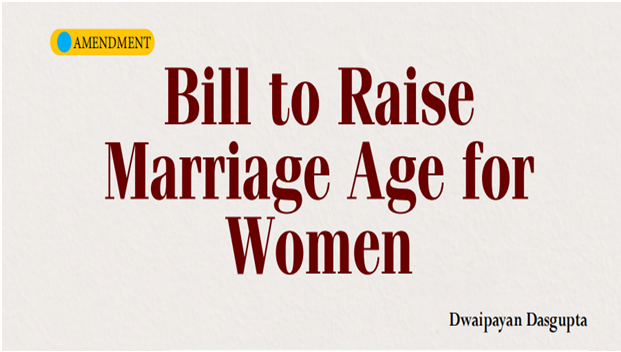 A social concern related to women is making headlines across the country regarding the proposed bill for raising the legal age of marriage for women from the present 18 years to 21 years, incidentally the same age as for men. The Union Cabinet has decided to clear the Bill which seeks to raise marriage age of women from 18 to 21.  Following the Cabinet’s approval, it is expected that during the ongoing winter session of Parliament, the government will bring in an Amendment to the Prohibition of Child Marriage Act, 2006, and consequently bring amendments to the Special Marriage Act and personal laws such as the Hindu Marriage Act, 1955, the 1872 Indian Christian Marriage Act, the 1936 Parsi Marriage and Divorce Act etc.

Significantly, the government decision is based on the recommendations submitted to Niti Aayog in December 2020 by a Task Force headed by Jaya Jaitly. This committee was tasked to examine nuts and bolts of matters pertaining to age of motherhood, imperatives of lowering MMR (Maternal Mortality Rate), improvement of nutritional levels and related issues. Jaitly was reportedly of the opinion that their reasoning behind the recommendations was never one of population control. 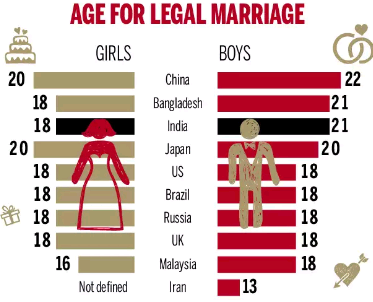 However, the move is certainly a step forward designed to empower women so that they can do work in conformity with their needs, wants, beliefs, et al. The task force set up in June 2020 by the Ministry of Women and Child Development has recommended that a comprehensive public awareness campaign be launched to encourage social acceptance of the decision. It has sought access to schools and universities for girls, including transportation in the case of educational institutes in far-flung areas. The steps have also been recommended for training of women in polytechnic institutes, skill and business training as well as livelihood enhancement as a means to ensure that there is an increase in marriageable age, also with sex education to be introduced in school. It has also sought access to schools and universities for girls, including transportation in the event of educational institutes in far-flung areas. Given the fact, that the early age of marriage and resultant early pregnancies in most cases affect nutritional levels of mothers and their girl children, such recommendations were long overdue. On the whole, what is needed most is delay in marriage that will have a positive impact on the economic, social and health of families, women, children and society.

Furthermore, if girls can show that if they are educated and financially independent, parents will definitely think twice before marrying them off early. In other words, higher education, employment and freedom from parents’ control over their marriage will enable women to make right decision to resist the pressure from them for early marriage or forced marriage. Since the idea behind the recommendation by the committee is the empowerment of women, it will also help them to be informed and make right decision at an appropriate time while entering the conjugal life, family planning about having children, if married. Therefore, the idea behind its recommendations is not population control but deferring the legal age of motherhood or marriage for women in order to avoid a likely negative impact on the mindset of young mother, and on Infant Mortality rate and Maternal Mortality Rate by amending the existing marriage Acts as stated above.