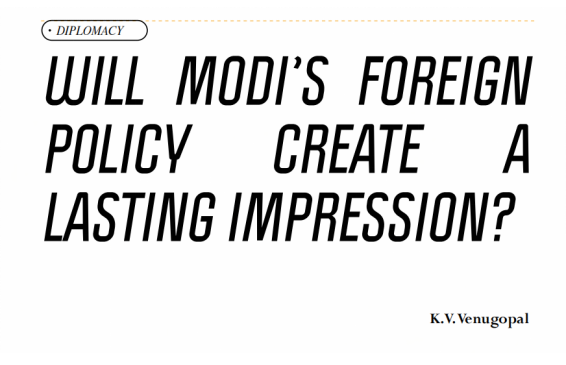 When India abstained from voting against Russia in the ongoing Russia-Ukraine war, an apprehension did arise that the Prime Minister Narendra Modi took an unfair stand that would hurt India’s image at the international level in the long-run. Little did the realisation dawn on his critics that the Prime Minister had to weigh in the pros and cons of the international situation and its ramifications before arriving at a clear-cut decision.

The Prime Minister proved beyond doubt that, he would neither succumb to the tantrums of the U.S., nor the wishes of Russia, as the impression gained in some political quarters that the Prime Minister was tilting towards U.S. to withstand the oppression from China. Modi merely followed the footsteps of his Gujarati brethren Morarji Desai when the late Prime Minister made it clear to the then Soviet Union premier Brezhnev in 1978 that India would not attack Pakistan at the insistence of his country. Similarly, Morarji Bhai also cautioned the then U.S. President, Jimmy Carter that India would adhere to the non-aligned movement neutrally, unlike in the era of Pandit Jawaharlal Nehru and Indira Gandhi. He did not hesitate to invite the then Israel Defence Minister, Moshe Dayan, which the previous Congress government never entertained. Nehru was wise enough to condemn the U.S. invasion of Vietnam, but overlooked the Soviet Union attack on Hungary and Czheslovakia.

Indira Gandhi was admired for her heroic efforts in ensuring the liberation of Bangladesh in 1971 and was hailed by the late BJP leader and Prime Minister, A.B. Vajpayee as “Durga”, but created an impression that India would tilt towards the Middle East countries all along in their confrontation with Israel at regular intervals, despite Tel Aviv extending its constant bonding towards India by recognising the birth of Bangladesh, ahead of Islamic countries.

It may be recalled that about six years ago, an Indian government official, in a meeting with the envoy of a neighbouring country, spelt out the consequences that the country would face if it crossed the BJP government’s foreign policy. The government led by Modi realised its folly and decided to be receptive from then onwards and to formulate its policies according to the prevailing situation in the international arena.