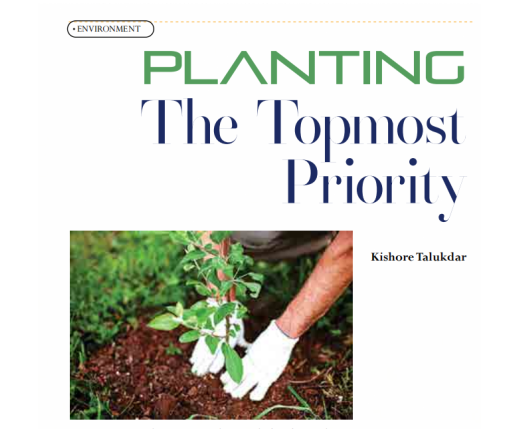 It goes without saying that the Earth is the lone planet in the Solar system what is known to own all characteristics required to support different life forms. Being perfect for sustenance of life, it is often referred to as a ‘Goldilocks planet’. A home to be proud of, the Earth, now, has to go through untold ordeal orchestrated by human. Yes, going by the rampant anthropogenic activities detrimental to the well being of nature, human appear to become the sole agent to determine the fate of our Earth. Strange though it may seem the fact is environment is the first casualty of any activities carried out to serve its interests galore. When it comes to point out such activities, slashing of vegetation tops the tally. The cleansing off vegetation to pave the way for the development is on the rise and it is instrumental in fragmentation of area under tree cover. According to the Millennium Ecosystem Assessment, about 54 countries have lost around 90 percent of their forest cover.

Welcome awaits development if the latter is made respecting the fragile environment because natural environment is the very foundation of our all life forms. The more mindless development activities, the more trials and tribulations of nature; the effect on biota could be volatile. However, there is a tendency to regard tree cover of forest area in high esteem, caring little to vegetation of non-forest landscape. Undoubtedly, it is true because such forest marks the faunal and floral diversity. But what type of mindset it is to demean tree cover of non-forest area. Value of vegetation should not be judged by its site. Whether it is in forest area or in non-forest area it serves the interests of living beings. With the fast depletion of forest cover and its consequent behavioral change of nature has already come to light, portending hard times ahead. Rising temperature, harming biodiversity, dwindling oxygen are some of fallouts of forest cover loss. It is high time the rot to be stemmed. Solution lies in addressing the woes of beleaguered environment and in this regard plantation can be a part of the solution.

When it comes to say about plantation, the objective of it is clear and so should be. Because such drive often comes a cropper because of lack of far sightedness. So, if it is planted to pale, it is better refrained from doing it. What  sometimes witnessed is that plantation is carried out without sparing a thought to the future of the planted sapling and such scene is particularly visible along the either side of the road.