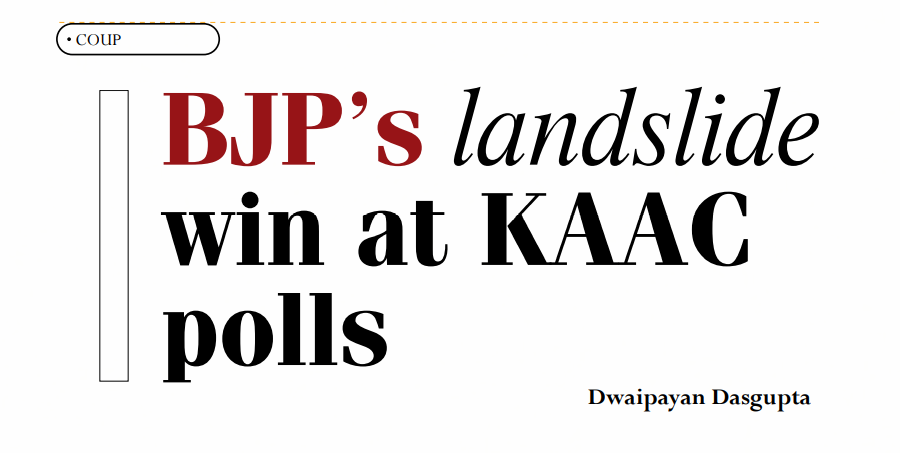 Just as cricket is the game of uncertainty, an election, a democratic exercise, be it parliamentary, assembly or, panchayat or even civic bodies’ poll, whatsoever, is also considered to be a game of uncertainty. But just as cricket, it is, indeed, not always true of a dominant political party, especially if it is a cohesive, well-knit and ruling outfit, as the Congress was till before the pre-emergency period in this country. If it is so, there is every likelihood of its or its ruling coalition registering an easy win in any election. In other words, whichever ruling party is in a tidy state and its public image is on the upswing with its unique performance on some key sectors of economy, that outfit stands a fair chance of winning in an election despite the opposition parties’ pitting strong candidates against the ruling party.

The ruling Bharatiya Janata Party (BJP) in Assam has it all, and, that is exactly why the dominant saffron brigade had been successful in making a clean sweep in the recently-held Karbi Anglong Autonomous Council (KAAC) elections in the State by winning all the 26 seats. It was essentially a one-sided affair. ‘The Party’s landslide victory in the polls establishes one crucial fact that the ruling party has been growing in strength since the 2014 Lok Sabha polls in which it bagged seven out of 14 seats in the State. As usual development had been the BJP’s major poll plank this time too.

The spadework of grassroots workers for drumming up public support and the high-voltage poll campaigning  led by the Chief Minister, Himanta Biswa Sarma, who attended as many as 19 meetings at different places in the hills district in more than four days as also the party MLAs and ministers’ stay there for mobilising support – all these contribute immensely towards the ruling party’s huge electoral success in the Council poll. Lack of discipline in the principal opposition party, the Congress, and the prevailing peaceful atmosphere has also enabled the BJP to take the wind out of the former’s sail. Restoring the semblance of peace in the hills district had been possible because of the signing of a peace deal with five insurgent groups in September last year. After the latest peace deal, more than 1,000 militants surrendered, and a special package of Rs.1,000 crore to be spent over a period of five years, was announced. Incidentally, it is the third such agreement

The party has termed the “huge victory” in the district a true affirmation of public trust. Notably, it has been the second successive win for the party, which came close on the heels of the April urban civic body poll, the Guwahati Municipal Corporation (GMC) election in which the ruling party won 58 of 60 seats, but the Congress drew blank as it did in the KAAC polls.

Although the Congress was aware that the people in the hill district usually went with the ruling establishment, the party leaders were hoping to fare well in eight seats. This time, however, there were six political parties in the fray. For instance, the BJP contested in all the 26 seats, the Congress fielded candidates in 24 seats, the Aam Admi Party in 10 and CPI(ML) in 15 seats. In the 2017 KAAC polls, the BJP bagged 24 seats, while the Congress which contested all seats, drew blank.