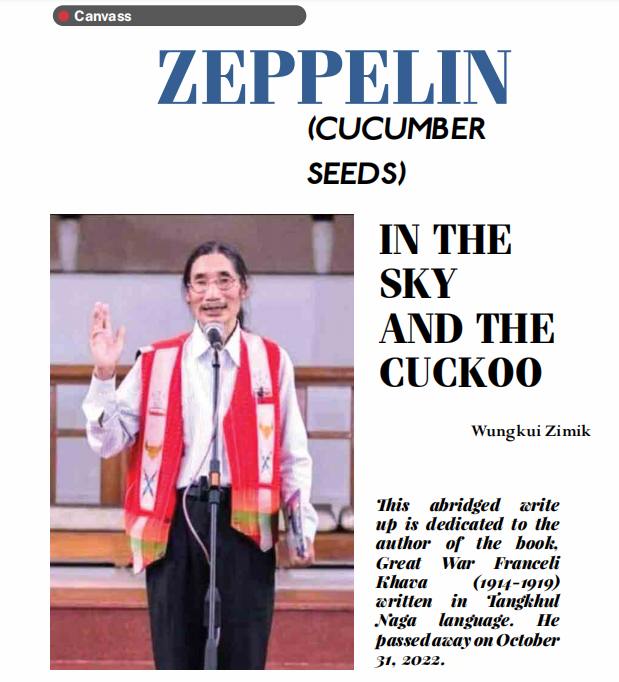 Zeppelin was a large German airship or dirigible balloon cylindrical in shape, used as bombers and scouts. When the World War 1 began, the popular expectation was expressed in a German children's song:

Help us in the war,

England shall be destroyed by fire,

In the book, Great War France li Khava (1914-1919) by K.S. Wungnaoyo, the Zeppelin was described as a balloon that looked like Cucumber seeds  flying in the sky. It was used to gather information about the war. Aeroplanes (which had been invented just about 10 years before WW1 by the Wright brothers) were extensively used.

The labour corps who went from Manipur were digging trenches higher than their heights, about 6 ft. They were stronger than those from Europe. The work done by eight Tangkhuls was done by 12 European workers. After a harsh winter of snow, the calls of the Cuckoo reminded the labourers about their families back home. Initiated by Ramyaiphang of Koso and Thishi of Nungshong, they all began to say,

"Didn't William Pettigrew say it would be just one year? Who will sow the seeds? Who will perform the rituals (Shar pahor)? Who will look after our children and their grandparents? Thus, they began to protest and the authorities granted permission for their return.

Some of the places they went in France were Marseilles, a seaport, Amans, Bargis and others. Number of 39 Mao corps were stationed near Arras, close to Paris. The  complexion of the women they saw were like ripened bananas and their hair was like silk corn.  Blondes?

On the way to France, many vomited while traveling in a ship and they thought they might not survive. L. Maiphuk of Langdang who was sick was thrown in the ocean alive. Possibly, for such act of inhumane treatment meted out to the labour corps, a written apology must be sought from King Charles, even now.

R. RUICHUMHAO, one of the outstanding leaders of the labour corps was suspected to be a spy of the enemy. Later, it was learnt that he regularly went to a secluded place to pray. He prayed for the war to end, for the safe return of his people, and for the victory of England. He was highly respected for his prayers. (During that time, in 1918, there was a global pandemic seven times worse than the covid-19 in casualties. An estimated 50 million died in the Spanish flu pandemic, about 7 million lost their lives in the covid-19 pandemic.)

What could be learned from the World War One experience?

To read the further articles please get your copy of Eastern Panorama January issue or mail to contact.easternpanorama@gmail.com