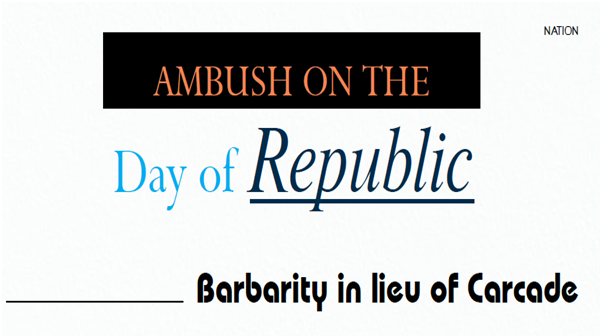 Republic Day is the special day for the people of India which came into existence much later after the struggle withholding the emotions, love and sacrifices made by our ancestors & freedom fighters. We are blessed to celebrate it with valor and elaborate it our generations to come. It honours the day on which the Constitution of India came into effect on 26 January 1950 replacing the Government of India Act (1935) as the governing document of India and thus, turning the nation into a newly formed republic.

It has been celebrated since years showcasing the gallantry of India in the national capital, New Delhi, at the Rajpath before the President of India. On this day, ceremonious parades takes place at the Rajpath, which are performed as a tribute to India; its unity in diversity and rich cultural heritage.

But never ever have someone imagined the 72nd Republic of India would be so indifferent from the rest followed since years. Who could imagine the violence would erupt all over the capital breaking the principles of the constitution on the very day of its anniversary enacted 72 years back.

Thousands of farmers from Punjab, Haryana and western Uttar Pradesh have been camping at the several borders of the national capital since November 26 last year demanding the repealing of the three farm laws. Eleven rounds of talks of farmers with the farmers in last two months have remained inconclusive. After negotiations with Delhi Police, four routes were decided for the farmers’ tractor parade, and 18 unions had given an undertaking to follow these.

The entire timeline of the farmer’s parade narrates the story of the adversity of violence. It was to be performed peacefully but had turned out to be bloody becoming "Occupy Delhi" movement in no time.

The Farmer Ganatantra Rally was scheduled for 12 to 5 p.m.

Farmers chase police with their tractors, again damage several DTC buses near ITO as they are prevented from moving towards the Red Fort.

Hundreds of farmers riding tractors, bikes and cars reach Red Fort portico and enter its premises and hoist the farmer union flags and saffron pennant with a Sikh religious symbol on the first rampart of the iconic 17th century monument.

A farmer named Navneet Singh dies after a tractor in which he was travelling turns turtle.

Slowly and steadily, the goons enter the Red Fort premises and tried occupying the historical Fort unfurling their religious flag.

Police enters Red Fort premises and tries to remove the farmer union flags. This is exactly from where Prime Minister hoists the national flag every year on Independence Day.

Overall it was a derogatory act. In no way it can be defended for any cause. The farmers or the miscreants within their group have set a slap on the democrats of India.

It’s hard for anybody to digest such gruesome act by them. Farmers are the lifeline not only for the country but for the whole world. They give life to the lifeless but not take or hurt someone else life. They turn the barren into greenery and known the Anna data or Food Provider of our country.

Since ages we have witnessed the farmer’s struggling for their rights. Will see to the list of the protests conducted peacefully throughout. Still, farmers have always set an example of patience even during the harshest conditions and stood again to cultivate the new beginning.

But the aggressive nature which was seen in the land of Delhi was unfortunate. The miscreants not only broke the protocols but also attacked the jawans, including few citizens and media people. Women personnel were also not spared. Do you think….they are the real farmers. Any blind person will obviously say No. No they were not the real farmers but the miscreants who had entered in the farmers rally and created nuisance. The reason we hope will be verified soon. Any civilized citizen will not break the principles of the constitution…

Before we withhold any profession in whatever field…

And accordingly we have to adhere to the principles of the constitution which means paying respect and homage to our country.