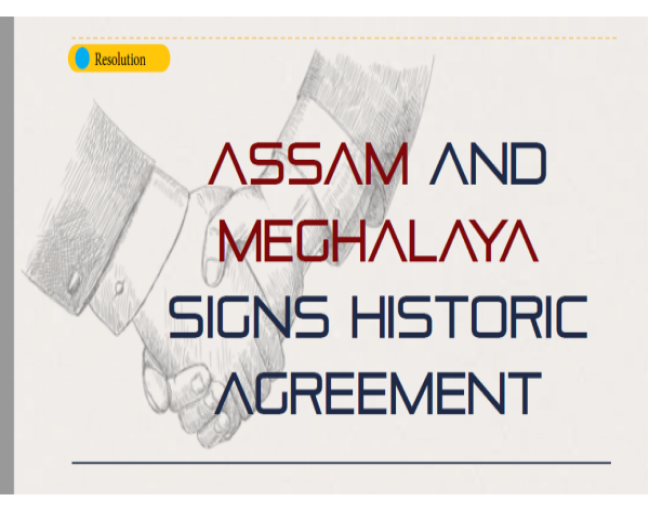 A historic agreement was signed in New Delhi  by the Chief Minister of Assam Shri Himanta Biswa Sarma, and the Chief Minister of Meghalaya Shri Conrad K. Sangma, in presence of the Union Home Minister Shri Amit Shah, for the settlement of the interstate boundary between the States of Assam and Meghalaya, in respect of 6 out of 12 areas of difference. This is another milestone in the fulfilment of Prime Minister, Shri Narendra Modi’s vision of a peaceful and prosperous North East. Senior officers from Union Ministry of Home Affairs, Government of Assam and Government of Meghalaya were also present on the occasion.

Speaking on this occasion, Union Home Minister Shri Amit Shah said that its a historic day for a dispute-free North East.

Shri Amit Shah said that during the last three years, the Government under the leadership of Prime Minister Shri Narendra Modi has signed several agreements to end extremism and bring lasting peace to the North Eastern states. He said NLFT (SD) agreement was signed in August, 2019 to bring the extremists in the mainstream of society in Tripura which contributed greatly in making Tripura a peaceful state. Then a landmark agreement was signed on January 16, 2020, to solve the 23-year-old Bru-Reang refugee crisis forever. Under this, more than 37,000 tribals who were leading a difficult life, are now living a life of dignity today. Shri Shah said that the Bodo Accord signed on 27 January 2020 resolved the 50 year old Bodo issue while maintaining the original form of Assam. The Assam Government and the Government of India have fulfilled 95 percent of the terms of this agreement and today Bodoland is known as a peaceful region and is on the path of development. The Karbi-Anglong Agreement was signed on September 4, 2021 to resolve the long-standing dispute in the Karbi regions of Assam. Under this, more than 1,000 armed cadres surrendered and joined the mainstream.

To read the further articles please get your copy of Eastern Panorama April  issue @http://www.magzter.com/IN/Hill-Publications/Eastern-Panorama/News/ or mail to contact @easternpanorama.in