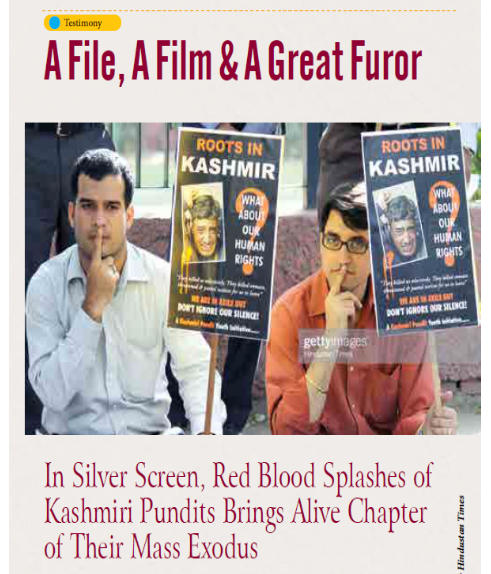 Declassification of files the world over always create flutters as several skeletons starts walking out of them to walk in the streets to narrate their true horror stories.

Imagine what would happen if the secret files on the Partition Massacre of Hindus of Bengal and Punjab are declassified? It certainly will cause further downturn to the so called pseudo secular parties in India that were instrumental in dividing India in three parts in 1947.

No wonder, film Director Vivek Agnihotri has been given the Y-category security with CRPF cover after receiving death threats from Islamic terrorists and certain Muslim groups.

Agnihotri’s only crime was that he opened up a filmy file on the massacres of Kashmiri Pundits in Jammu and Kashmir allowing departed souls to walk out of files tightly closed by a political party and its allies.

Yes, Agnihotri is the Director of 'The Kashmir Files' that grossed Rs 3.55 crore on its opening day on the release day of the film and did a business of Rs 207.33 crore in the first two weeks of running in theatres.

Here, we see the file-power, thanks to Agnihotri. Keep it up,  Agnihotri Ji, the majority of the Indians sans so called secularists, liberals and separatist minded people are with you. Don’t get unnerved by the demand for ban on The Kashmir Files as done by Badruddin Ajmal, the Chief of All India United Democratic Front (AIUDF) which earlier was a poll partner of the Congress.

It is a different thing that the Congress Government earlier had banned films like Aandhi, Kissa Kursi Ka and Black Friday. For that matter, the Soviet Union or today’s Russia also had banned the movie Doctor Zhivago. It is in this backdrop that we find, rather justifiably, that the Madhya Pradesh Chief Minister Shivraj Singh Chouhan said land will be given to Agnihotri to create a ‘genocide museum’ in Bhopal.

To this, a so called secular politician often coming in news for wrong reasons argued a ‘genocide museum’ should not come up in Bhopal as it would disturb the communal harmony.

Where was he when the communal harmony in Jammu and Kashmir was shredded when the Kashmiri Pundits ware slaughtered?

To read the further articles please get your copy of Eastern Panorama April  issue @http://www.magzter.com/IN/Hill-Publications/Eastern-Panorama/News/ or mail to contact @easternpanorama.in