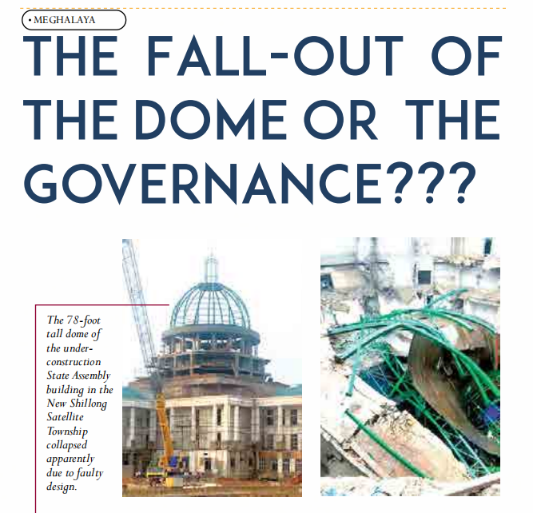 Ever since the fall-out of the dome of the new Assembly Building, the criticism of the Conrad Government has taken a hype. The dome once said to be an iconic structure of Shillong, the symbol of Meghalaya’s progress has become yet another reason to regress the Sangma’s political wheel for the upcoming elections to be held in 2023. The collapse of the dome has not gone down well with citizens, political parties, civil societies and pressure groups who poured scorn on the corrupt practices by greedy politicians and contractors that has endangered lives. The Government is blamed allegedly for encouraging corruption and misuse of funds.

On the late night of May 22, due to the heavy rainfall,  the dome of the under-construction Assembly building at Mawdiangdiang collapsed.  According to construction workers staying at the site,  heard a loud noise at around 12:30-12:45 am. The 70-ton steel dome crashed at around 12:30 am. However, fortunately there was no loss of lives in the incident. Executive Engineer of PWD (Building), Ransom Sutnga informed that as per analysis, the dome collapsed due to faulty design. The dome’s actual height is about 65 metres while the minar’s height is 13 metres. The dome was a heavy structure, perhaps too much heavy for the columns and the beams to bear. This resulted in the entire structure coming down. The design for the Assembly building was vetted by IIT Roorkee and is being implemented by the Uttar Pradesh Rajkiya Nirman Nigam Ltd.

After the incident, it was followed with the fierce political blame game, with the National People’s Party (NPP)-led state government facing criticism from Opposition parties as well as ally BJP, and questions about alleged corruption.

The BJP, a constituent of the alliance government headed by the National People’s Party (NPP), has been particularly severe on Chief Minister Conrad K. Sangma. It accused him of misusing the Central funds “provided by the BJP”.

Bernard N. Marak, Vice-President of the State BJP unit, said Mr. Sangma should either let the CBI probe the collapse of the 70-tonne dome and other irregularities or quit. The BJP had anticipated good governance, all-round development and zero corruption when it lent support to the NPP. But the Chief Minister let the BJP and the people of the state down.

State BJP President Ernest Mawrie, “The greed of politicians, officials and contractors is endangering lives. What if the dome had collapsed after the inauguration of the Assembly building and the House was in session?”

The BJP, which is a coalition partner of National People’s Party (NPP),-led ruling Meghalaya Democratic Alliance (MDA), has demanded that Chief Minister Conrad K Sangma resign over suspected corruption, particularly in the aftermath of the collapse of the state's historic assembly building in New Shillong.