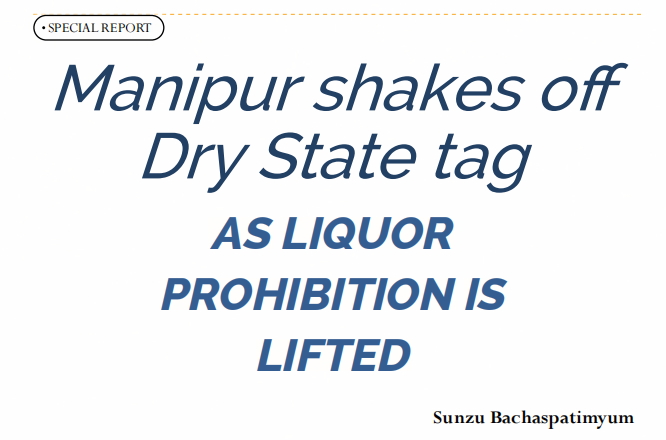 The government of Manipur, cutting across party lines have always tried to do away with the liquor prohibition clamped on the State as an acknowledgment of the futility of the exercise and the loss of resources generated by the illicit liquor business. Despite attempts, none had so far ventured to defy the strong, prohibition campaign sustained by various civil society organizations, particularly women vigilante groups or Meira Paibis, backed by proscribed outfits.

The incumbent Chief Minister of Manipur, N. Biren Singh seems to be a cut above the rest as he announced the partial lifting of the existing liquor prohibition on 20th September 2022.

As per the State Cabinet decision, the sale of liquor will be confined to some specific locations, including district headquarters, tourist spots, security camps and hotels, having at least 20 bedded lodging facilities. Government spokesperson Letpao Haokip said, the decision was taken considering the health issues caused by consumption of unregulated liquor and to boost state’s revenue. He claimed that regulating liquor would earn an annual revenue of up to Rs 6 crores for the State.

As expected the partial lifting of prohibition was strongly opposed by several influential Meira Paibi groups and the Coalition Against Drugs and Alcohol (CADA), who termed the Cabinet decision as unfortunate and demanded immediate reversal of the decision.

While the government has invited pro prohibition lobbyists for talks to arrive at an understanding on the issue, the lobbyists refused to come for talks insisting a white paper first on the liquor policy.

Prior to Manipur becoming a dry state in 1991 during the tenure of the then MPP Chief Minister, RK Ranbir Singh, womenfolk banded themselves as Nisha Bandis or vigilante against drugs and alcoholism, carried out strong anti-liquor campaigns to curb social evils, particularly domestic violence.

During the late 80s, Manipur, particularly Imphal valley was ravaged by substance abuse and alcoholism, breaking up homes by the dozens. The situation was so grave that women had to come out on the street to save the family by maintaining vigil to prevent men from alcoholism and substance abuse. Men who were caught indulging in alcoholism or substance abuse were humiliated in full public glare so that they abstain from such indulgence in the future to save the society. Proscribed militant outfits, namely RPF/PLA who initiated the banning of sale and consumption of liquor in the first  place,  started awarding violent punishment to those  who were involved in the illicit trade as well as those who were the abusers. Shooting at the limbs of abusers was a common warning to repeated offenders.

Swept by the prevailing public sentiments, the RK Ranbir Singh government passed the Liquor Prohibition Act of 1991 and officially declared Manipur a “dry state” with the exemption granted to Schedule Caste (SC) and Schedule Tribe (ST) communities to brew liquor for traditional purposes.