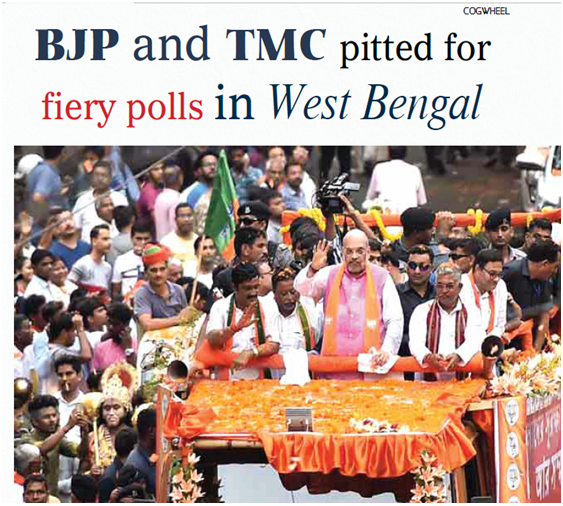 Buoyant by its electoral gains in the 2019 Lok Sabha elections where it won 18 out of the 42 seats, BJP is all out to wrestle Trinamool Congress from West Bengal in the forthcoming State Assembly Election, using a multi prong strategy. While it is hoping to lure general voters by identifying with one of Bengal’s most fascinating icons, Subhas Chandra Bose, the saffron brigade is also wooing a minority community to defeat Mamata Banerjee in the State Polls.

With the crucial State polls, hardly a few months away, the BJP has turned Netaji’s 125th birth anniversary on 23 January into a political Launch pad in the turf war with the ruling Trinamool Congress. The BJP is leaving no stone unturned and the trump card, up their sleeves is Netaji, whose legacy resonates across Bengal. Never mind, the fact that Netaji served as the President of the Indian National Congress from 1938 to 1939 was a leader of the Forward Block.

On the other hand, the West Bengal Chief Minister and TMC Supremo Mamata Banerjee have accused the BJP of using Netaji Subhas Chandra Bose as a poll stunt and has counteracted the BJP’s up-man-ship political game. While the Centre had declared Netaji’s birthday as Parakram Diwas, Mamata Banerjee announced that the day will be observed as “Desh Nayak Diwas” (the day of the national hero), cleverly  disguising her actions with the “Bengali Asmita” (identity) to turn the political  battle with the BJP into a Bengali vs bahari (outsiders).

Even as the State Assembly Elections may be a few months away but the political atmosphere is becoming so charged up with attacks and counter attacks rising between the BJP and TMC, leading to a war of words between the two parties, the Congress and CPI (M) are simply reduced to mute spectators.

While the largest strategist of wooing Bengal voters with the year-long birth anniversary of Netaji Subhas Chandra Bose is a continuous project for the BJP, it is also wooing the Matuas, the little known Bengal minority community, who are the deciding factor across 40 odd assembly constituencies.

The Matuas are spread over four districts of North 24 Parganas, Nadia, Murshidabad and Dinajpur. They constitute around 20% of the state’s population. They came to West Bengal as refugees during the Bengal partition, tracing their ancestry to East Bengal. They enjoy voting rights and Aadhaar cards but permanent citizenship continues to elude them. The Matuas who have always been active in state politics have a BJP camp and a Trinamool camp. Only this time around, the BJP camp makes up a significant part of the community.

“Right now, we’ve voting rights but not citizenship. We’ll be illegal migrants if the government decides to implement the Citizenship Amendment Act 2003. We’re hoping that the CAA would be implemented soon as it would give us citizenship right,” said Hemanta Thakur, a Matua taxi driver in Kolkata who is disappointed by the delay in the roll out of the CAA provisions.

Union Home Minister, Amit Shah has had meetings with the Matua community leaders over the issue and has promised to resolve the citizenship issue. He is again scheduled to meet the community leaders when he visits the state in January.

Not to be left out, Bengal Chief Minister Mamata Banerjee has been wooing the community as well as announcing several development projects constituting a development board for the Matuas. Her government is also building a university in the name of the Matua spiritual leader, Harichand Thakur. His birth date has been notified as a state holiday. Processes are also on to include Matua history in the state education curriculum.

With the campaigning heating up, Mamata Benerjee has warned the Matuas of the CAA saying its implementation will only make them aliens. “BJP is trying to mislead you on CAA. All of you are citizens here. If any of you apply for citizenship, you will be identified as an illegal Matua … do not fall into the trap,” she said at a rally in Bongaon in the first week of December.

Setting the fiery campaign tone of West Bengal, Union Home Minister Amit Shah, while welcoming the TMC deserters into the saffron fold targeted TMC leader and Chief Minister Mamata Banerjee saying, “This is just the beginning. You will be alone by the time the polls start”.