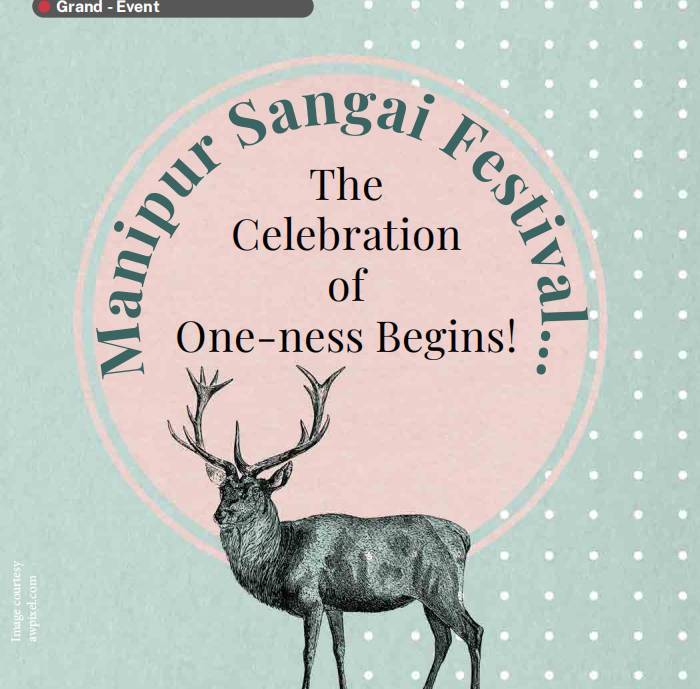 The Sangai Festival is the largest tourism festival in Manipur. The festival is named  after the state animal Sangai, the brow-antlered deer found only in Manipur. The Festival  have been organized grandly this time after the COVID-19 pandemic hit the country since last two years. The festival is celebrated as the ‘Festival of Oneness’ to encourage a sense of  belongingness, and pride in ownership of the land among the people.

The 11th edition of the most prominent spectacle, the Manipur Sangai Festival 2022  was inaugurated by Union Tourism Minister of Culture, Tourism & DoNER Shri G Kishan Reddy, at the Sangai Ethnic Park, Moirang Khunou in Bishnupur district.  According to State Tourism Director W Ibohal, the Sangai Ethnic Park was constructed at the cost of Rs 45 crore, which was the main venue of Manipur Sangai Festival 2022. The park was inaugurated by the Chief Minister N Biren Singh on the first day of the festival. The 10-day-long festival was held in 13 venues across six districts in the Northeastern state. The Union Minister expressed his gratitude for being able to participate in the festival, and hailed the natural beauty of Manipur. He  said, the Union Government has been taking up initiatives for the development of the Northeast. He stated that he feels lucky to meet groups of 33 different communities in one place, who have come to represent their communities in the festival.

A festival is never completed without a feast. The local flavours and exotic Manipuri dishes was relished at the food stalls in the festival grounds. The ‘Cherry Blossom Festival’ at Senapati District was another special attraction of the festival and with Dzuko valley in the same district, the festival attracts huge number of visitors during the festival. The festival is an opportunity for artisans and weavers to showcase their creativity and talent through the indigenous forms of handicrafts and handlooms. People also have insights about the living-style of  various tribes through the themed huts display at the heritage park. Locals exhibit their skills in the native sports which includes the famous martial art of Manipur - Thang Ta (a combination of Spear & Sword skills) along with other sports. Sagol Kangjei is the indigenous form of polo that is extensively played here. Apart from these sports, many other adventure sports like trekking, white water rafting and parasailing at various locations was also indulged.