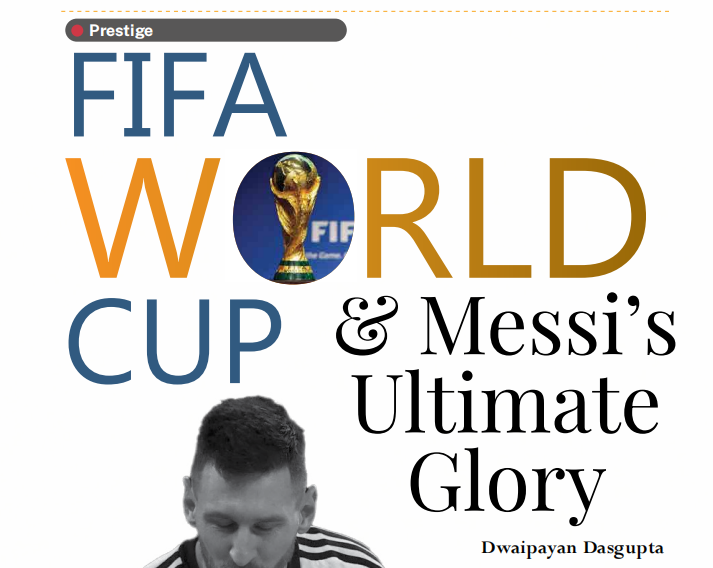 December 18, 2022 was a red letter day for the people of Argentina because on that decisive day the country’s captain and forward Lionel Messi, one of the greatest players of all time, lifted the most-prestigious FIFA World Cup Trophy on behalf of the country. He received it during the award-giving ceremony amid cheers from the spectators after Argentina won the Qatar 2022 World Cup football final match between Argentina and reining champions France which was defeated on 4-2 penalties, following a dramatic 3-3 draw even after extra time, at the jam-packed Lusail stadium, north of Doha.

So, at long last talismanic forward 10, Messi shepherded Argentina to the FIFA World Cup glory by offering a career-defining performance in the most extraordinary final in the 22nd edition of the World Soccer Cup, a final that will go down in the soccer world history as one of the best ever. For his monumental achievement, he was awarded the Golden Ball for the best player.  Smiling Messi now had what he had always cherished, the ultimate award in the international football. It is the best prize that is reserved for those players who are regarded as the best in  their sports (greatest) of all time(G.O.A.T).

Messi who had showcased his best skill, nimble footwork and an equally devastating ability to deliver it in the final, scored two of his team’s three goals and then another in a shoot-out when Argentina beat France 4-2 on penalties to claim on to a third World Cup title in spite of France star striker Kylian Mbappe, who turns 24 scoring the first hat-trick in the final 56 years and won the Goden Boot as the top scorer of the competition. It was due to his prowess that France managed to offer resistance to Argentina for a while. France’s performance, however, was all the more praiseworthy as they were without key players such as Paul Pogba and Karim Benzema, who missed the World Cup altogether, and had to content with a flu outbreak in the final days of the tournament. French players strained every nerve to hold their heads high against all odds.

Messi’s heart was so genial and magnanimous that at the end of the game he consoled crying Mbappe.

The World Cup final match sequence changed with the swift movement of ball in the second-half. But Argentina dominated most of the first-half scoring two goals—one by Messi stemming from a penalty, and another by Di Maria, the game’s outstanding attacking threat, thanks to subtle passes including one from Messi. By half-time, Maria had drawn a distinctly soft penalty for a foul by Dembele, Messi had duly converted. When France seemed slack and unsettled, Didier Deschamps, French football manager, did what he could to restore the team by axing both Dembele and Oliver Giroud before half-time. But it did make little difference. France barely dwelt a blow on Argentina.

Mbappe who had the Golden Boot with eight goals had to finish second, because Argentina had Emi Martinez in the ranks. In the final, he saved Kingsley Coman’s shot and kept A.Tchouameni away. Argentina did not miss any of their four penalties with Messi, Pablo Dybala, Paredes and Montiel al converting.