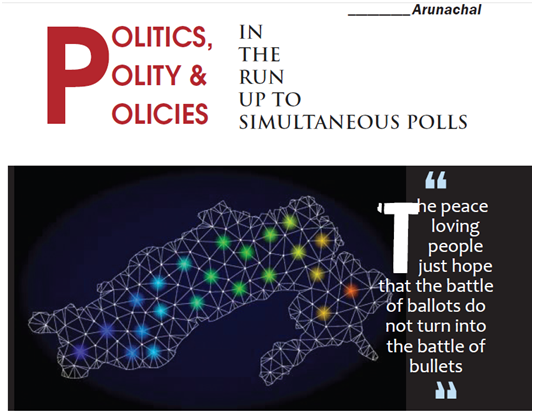 Since its attainment of full fledged statehood, Arunachal Pradesh is all set to go to polls for the first time with a non Congress ruling government in the state. The state will have simultaneous polls for both the assembly and parliament in the first phase on 11 April. While the electorates will elect the sixty legislators to the seventh legislative assembly, for parliament it will be for only two members. Apart from the two main national parties and the state's lone regional party People's Party of Arunachal, this election has witnessed the entrance of the National People's Party for one, which of late have been hitting the right notes, while the others include the Janata Dal (Secular), Janata Dal (United), the All India Party and All India Forward Block. The Nationalist People's Party and Trinamool Congress which had put up candidates in the 2014 elections have drawn a blank this time around.

While the ruling  BJP had fielded candidates in all the sixty constituencies and is already leading by three wins, as Phurpa Tsering from 4-Dirang, Er.Taba Tedir from 16-Yachuli and Adv.Kento Jini from 31-Aalo East assembly constituencies have been declared elected unopposed, the grand old party Congress could not even field candidates in all constituencies. In 4-Dirang, the Congress candidate withdrew his nomination paving way for the sitting legislator for a walk over while in 16-Yachuli the lone opponent nomination were rejected on scrutiny and same was the case in 31-Aalo East. The break-up of candidates remaining in the fray from the different political parties are, BJP -57, INC-46, PPA-9, NPP-30, JD (S)-12, JD (U)-15,AIP-1 and Independents-11. There are total of 181 candidates including 11 women in the fray for the remaining 57 assembly constituencies. For the two parliamentary constituencies there are a total of 12 candidates with 7 for the 1-West Arunachal and 5 for the 2-East Arunachal parliamentary constituencies.

The 49-Bordumsa Diyun (Unreserved) assembly constituency has the largest number of candidates with a total of 10 including a woman. 48-Lekang has the second highest number with a total of seven. Coincidentally, both these constituencies has a major concentration of Non - APSTs (Non-Arunachal Pradesh Scheduled Tribes) who were recently in the news for demanding the Permanent Residential Certificate (PRC). Following fallout of the PRC issue, the protests by indigenous people had turned violent and the state's twin capital cities of Itanagar and Naharlagun were in chaos with breakdown of law and order which led to loss of lives and property. The two constituencies are also witnessing the entrance of outsider candidates who are not domiciles of the constituency trying to cash on the vote banks by playing on either the caste and communal lines while some have been cultivating sections of the Non-APST communities with the contentious PRC issue. In Lekang, the State Congress Chief Takam Sanjoy is trying his luck. Takam Sanjoy had lost his home turf of 18-Palin in 2004 and was later elected the Member of Parliament from west Arunachal but again lost the seat in 2014 against MoS Kiren Rijiju. People are wondering why a person of his stature is coming all the way leaving his home constituency. A voter of the constituency was of the opinion that there were neither records of any development nor welfare works done by these leaders in their respective constituencies and they are talking about development here which was nothing but an attempt to fool the people and to garner votes through divisive politics.

This time social and women's rights activist Smti. Jarjum Ete is also trying her luck from the western parliamentary constituency on a Janata Dal (Secular) ticket after being denied the Congress ticket though she has put in more than a decade of service for the party. She is facing the likes of Kiren Rijiju and former Chief Minister Nabam Tuki of the Congress who is simultaneously fighting both the parliamentary and assembly elections. In the west, the two times MP of the Congress and former Union Minister for Minority Affairs in the UPA-II government has returned to state politics contesting for the MLA seat this time. State BJP Chief Tapir Gao and four others are in the fray for the 2-East Arunachal parliamentary constituency. Notable amongst the candidates are former Home Minister James Lowangcha Wanglet of the Congress, who resigned from the BJP just before the polls were notified and the other C.C.Singpho shon left the BJP upon denial of the assembly ticket and now is an independent candidate.

The dynamics of polity has had a paradigm shift from how and what the elections were fought. This time social media has become a great medium of mudslinging and propaganda mongering. While the Congress is not much into social media campaigns bug, the BJP is leaving no stone unturned to push its agenda through the medium. For the first time in the history of the state a video alleged to be of Tapir Gao went viral in which a man is seen in a compromising act with a woman. The source of the video could not be ascertained but Gao said that he knew the people who were behind this lowly act and a police case has been filed. People have condemned the persons behind the viral video for stooping so low to score political points.

Being denied the party ticket despite putting in his efforts for the growth of the party in the state, Jarpum Gamlin was denied the BJP ticket so he resigned from the list of state General Secretary and is fighting the 27-Liromoba assembly constituency on NPP ticket. The constituency was once represented by his elder brother and former Chief Minister Late Jarbom Gamlin. His elder brother Jarkar Gamlin who was a sitting Minister was also denied the ticket so is not contesting this time.