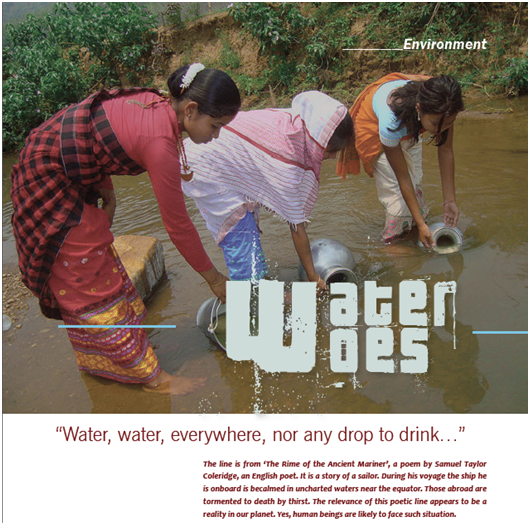 With the rising of global water consumption, pressure is mounting on water. It is stated that demand for water has grown annually by 2.4 percent globally. So, our lone human habitable planet has already felt the pinch of water crisis and it has emerged a serious challenge.  According to reports by the United Nations, two-third of the world’s population will face acute water shortage by 2025, affecting lives and livelihoods of 1.8 billion people. The UN World Water Assessment Programme, 7 billion people in 60 countries may cope with water scarcity by 2050.  The much-talked-about climate change, which is instrumental in altering the weather pattern, can make the matter worse.

Why does the question of water crisis arise in the earth where 75 percent earth’s surface is covered by water? This precious liquid is classified as salt water and fresh water. While 97.5 percent water is salt water, the remaining 2.5 percent is fresh water. Of the 2.5 percent fresh water about 70 percent is frozen in the icecaps of Antarctica and Greenland. So, the fact is human can directly use less than 1 percent of world’s fresh water. Such water used by human is found in rivers, lakes, reservoirs including those underground sources that are shallow enough to be tapped at an affordable cost. This amount of fresh water is enough to support us. But the root cause of the problem is water, which is unevenly distributed throughout the world. Over half of the earth’s fresh water supply is contained in just nine countries. They include the United States, Columbia, Canada, Brazil, Russia, China, Indonesia, the Democratic Republic of Congo and India. Nations like the United States use enormous water daily. But there are poor, underdeveloped countries in the world where the people go thirsty. According to the UN, people require a minimum of 50 liters of water a day for drinking, washing, cooking and sanitation. But in 1990, over a billion people did not have access to that.  The number of countries experiencing water stress is expected to be 50 including India by 2025.

Why the crisis: Growth of population, increasing industrialization and urbanization are the contributory factors. Mismanagement is another cause of the crisis. People’s habit of migrating to the cities is a challenge as well. In 1950, less than 30 percent people lived in cities. But this number grew to 47 percent in 2000. The number is expected to grow to 60 percent by 2025.

Water scarce has not spared India. India has 4 percent of world’s water availability to support 15 percent world’s population. But potable drinking water is still mirage for 50 percent villages in India. As a result 37.7 million people are affected by water-borne diseases. Year in year out the situation is getting worse.  It is stated that overall water demand will shoot up in India from 552 BCM to 1050 BCM following the urbanization, industrialization and increasing population.

Perhaps it was beyond imagination that water would become bone of contention. But based on growing demand for water, the latter may trigger war in the 21st century. The most precious gift of nature has become an apple of discord in various parts of the world. India is no exception. In India, situation is disturbing. In Delhi, the demand of water is on the rise. The gap between demand and supply is 530 MGD. Depletion of ground water is the cause. According to a Confederation of Indian Industries report, Delhi’s water table is depleting about 10 feet per annum. It has dropped to 350 feet in many places as compared to 30-40 feet at the time of Independence. Ground water depletion is a matter to be addressed, because it affects the supply of drinking water. The International Water Management Institute estimates that India’s grain harvest could be reduced by up to one fourth as a result of aquifer depletion. So, regulation to extract ground water needs to be put in place.

Battle over drinking water has already been reported. The situation at some parts of the country took a turn for the worse. In March 2010, Police had to be deployed at Ranikhet Cantonment Area at natural springs around the town so that all residents get water. Drying up of local springs caused the crisis in the area.