There could be several reasons behind this intense interest in politics.

One - the post-merger Sikkimese identity is so inextricably linked to politics which has induced a kind of caution in the Sikkimese mind. The Sikkimese destiny in the Republic of India, to a large extent, has been shaped by the political events that transpired around the time of the merger. Today, we have the luxury of hindsight and say, ‘If our leaders had done this, we would have benefited this way or that move would have given us this advantage’ and so on. With such a political history behind us, for better or for worse, politics continues to rule the roost in our conscience. Moreover, the local political narratives across the board have inculcated into our conscience a notion that it is only politics that can protect our Sikkimese distinctiveness which is so vital to Sikkimese identity in the larger national context. This explains the conscious distancing of Sikkim from national parties.

Two - politics have made such an impact on people’s lives in general that we cannot afford to stay away from it. Imagine the advantages of living in a place where MLAs, Ministers and the Chief Minister himself are much more easily accessible than anywhere else.

Three – the social recognition enjoyed by the politically active in society is quite tantalizing. Also, given our small population and relatively less rigorous political system, cadres can very easily move up in the party hierarchy. Getting sudden leverage into a candidature in several elections is quite common.

The first question that every single politician who gives public speeches must consider is - when people go back from political rallies that you address, do they go back more knowledgeable, more informed or do they go back angrier and with more hatred welling up in their heart? What is the design of your narrative?  This also applies to those leaders who make comments through media or posts them on their own social media page. Nothing is easier than expressing an angry diatribe or spewing a tirade adorned with unprintable vocabulary. But nothing can be as damaging to the public mind, particularly young minds, as doing this. Nobody wants to raise a generation of angry, frustrated and vengeful people with violence on their minds, weapons in their hands and obscenity on their lips. The most sensible points can be made in the gentlest of tones. That’s the productive oratory of true leadership. 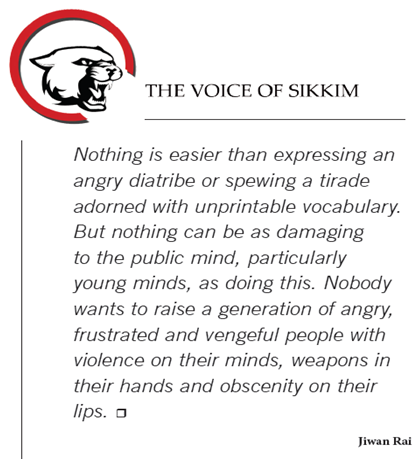 The second question - how much time do you invest in preparing your public speeches? Given the significance of political speeches, the substance they contain must be evaluated in clear terms. Playing to the gallery can be momentarily satisfying as it can win a lot of claps and hooting from the excited audience but when leaders listen to their own speeches alone at home, does it make them truly proud of what they said? If their speeches are documented and preserved for progeny, will they be treasured or trashed?  Every politician must cultivate the habit of reading, thinking, discussing and preparing his speech before jumping onto the platform. What a misery it would be if the leaders themselves haven’t even read the constitution of their own party, let alone other literature or books!