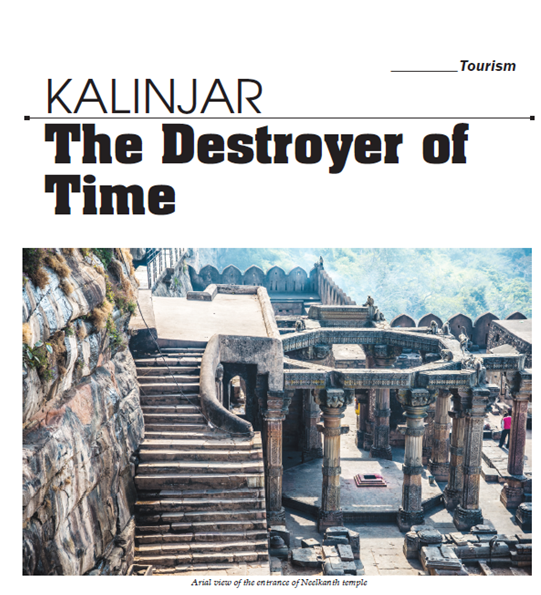 Mystery has thrill. Mystery has attraction. And so is the case with Kalinjar Fort in Banda district of Uttar Pradesh. After a lot of hearsay from people of various walks of life, I along with my wife decided to visit this unique fort. ‘Unique’ because the fort has not only a thrilling battle history, but is related also with the mythological story of ‘Samudra manthan’ (churning of the sea) and drinking of poison, so produced due to ‘Samudra manthan’, by Shiva. This place was also one of the very important sacred places of worship and meditation by ‘Kaul- Kapalik’ sect of tantric rituals in medieval period of our history.

It was our luck to have a knowledgeable guide in Shri Shailesh Kumar Arjaria. After a road journey of about 3 hours from Madla gate of Panna Tiger Reserve in M.P., we reached Kalinjar in forenoon. Ruins of the fort started to be visible as we reached the plateau top, but mystery was still a few steps ahead. At the end of the plateau, a beautifully carved stone gate welcomed us. Our vehicle has to stop at this gate and after passing through this gate, stone steps start leading us to the mysterious world of Kalinjar.

The mythological story of ‘Samudra manthan’ is known to many. Poison was one of the bye- products of ‘Samudra manthan’. When nobody wanted to have it, it was feared that poison will destroy the civilization, and hence, both ‘Danavas’ and ‘Devatas’ started worshiping Shiva to suggest remedy for that evil. Shiva drank the poison. Due to poison his throat (‘Kantha’) became blue (‘Neel’), and hence, he was named ‘Neelkantha’. Feeling thirsty due to drinking poison, Shiva wandered for cooling himself. In the process he came to rest at this site. Interestingly enough, the Nellkantha temple, said to be built during Gupta Period has a large ‘Shiva- linga’ with open mouth as in the case with a thirsty person. Just above the Neelkantha cave, there is a huge horizontal water-body between two horizontally placed rock-mass. I had to bend forward to have a look of the water-body.  Water trickles continuously on the ‘Shiva- linga’ from this water-body.

As we started climbing down, Shailesh had shown us many unique sculptures. Their presence indicated that we are now entering a place which was place of tantric rituals at some point of time in the past history. A few steps ahead we could see a unique sculpture of a ‘Shiva-ling’ over the back of ‘Nandi’ bull. I am fascinated by the cult of ‘Rudra’- as an inventor of ‘yoga’, ‘naad’, ‘brahma’, ‘nirtya’ and ‘aushadhi’, but I could not find a mention of ‘Rudra Shiva’ having nine heads and ten hands in any Hindu mythological scriptures. Here, one can find a beautiful sculpture of nine headed and ten armed Rudra Shiva. One can easily be bemused to see the imaginative hands of those sculptors.