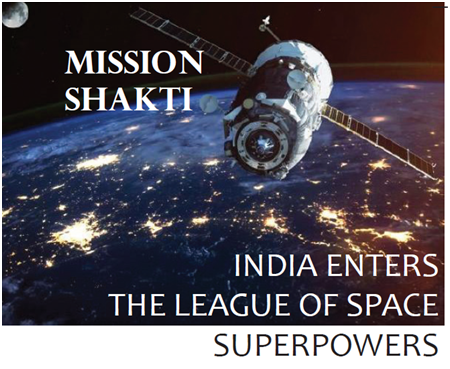 India achieved a historic feat on 27 March 2019 when it successfully shot down a low-earth orbit satellite using its anti-satellite (ASAT) missile. The test named Mission Shakti was jointly carried out by the Defence Research and Development Organization (DRDO) and the Indian Space Research Organization (ISRO) in the Dr. APJ Abdul Kalam Island in Odisha to verify whether India possesses the capability to safeguard its assets in the space. With this accomplishment, India has officially entered a select group of countries – United States of America, Russia and China who possess anti-satellite missile technology. In a televised address to the nation, Prime Minister Narendra Modi emphasized that India does not intend to commence an arms race in outer space. According the Ministry of External Affairs (MEA), the test sends out a strong message of credible deterrence and does not target any particular country.

The significance of the test lies in the fact that India has for the first time tested and successfully demonstrated its capability to intercept a satellite and shoot it down in space based on complete indigenous technology. DRDO’s Ballistic Missile Interceptor was used to conduct the test. The use of domestic technology has further added to India’s credentials given the fact that having been kept away from acquiring key technologies for a considerable duration, the country effectively developed its own nuclear and space technology. With the success of Mission Shakti, India has crossed new frontiers to step into an elite club of space superpowers. Not only has this been a remarkable achievement, the manner of conducting the test has also been lauded. Paying heed to international environmental concerns, the test was carried out in the lower atmosphere to ensure that no space debris was generated. Whatever debris has accumulated will decay and fall on the earth in two weeks. In conducting this test, India is not in violation of any international treaty. The principal treaty on space is the Outer Space Treaty, 1967 which only prevents weapons of mass destruction in outer space.

Questions have been raised along several quarters over the timing of the test considering the dates for Lok Sabha elections have been announced by the Election Commission of India (ECI). With the EC’s clean chit to the PM on his Mission Shakti address to the nation, such concerns have been defeated. New Delhi has informed that the test was conducted only after assessing the capabilities to ensure its success. The Prime Minister triumphantly announced that the entire mission was completed in three minutes. Given India’s rapidly increasing space programme, Mission Shakti is a step in the right direction. ASATs are weapons that can destroy satellites for strategic military purposes. With India’s space programme being a critical backbone of the country’s security, economic and social infrastructure, such deterrence is of vital importance.

It is noteworthy, that the test has followed close on the heels of the Balakot air strikes last month, thereby adding another feather on the cap of the NDA regime led by the PM Narendra Modi. With the Lok Sabha elections round the corner, an intrepid decision such as this is sure to bolster the image of the Prime Minister. Electoral advantages aside, acquiring formidable technological prowess to target and destroy satellites of the enemy has propelled India into the league of space superpowers – a triumph every Indian is proud of.