Few examples could help us to understand the usage of money being extensively used at the early stage of civilization. For example, sometime around 600 BC in India, coinage spread to a great extends called Karshanapa. The word cash was derived from the Sanskrit word Karsha. Hope you did not know that!

At the same time in the region of Greece, around 600 BC, Lydia’s King Alyattes issued coins. It increased both internal and external trade, making one of the richest empires in Asia Minor. The coins were made up of electrum, an alloy of silver and gold.

Ancient people must have learnt the concept of income by then. In other words earning, spending and even saving must have started. Ancient cities, like Babylonia, Lydia, Luxor, Patiliputra, Taxila , Rome etc reached to a great height with prosperity. 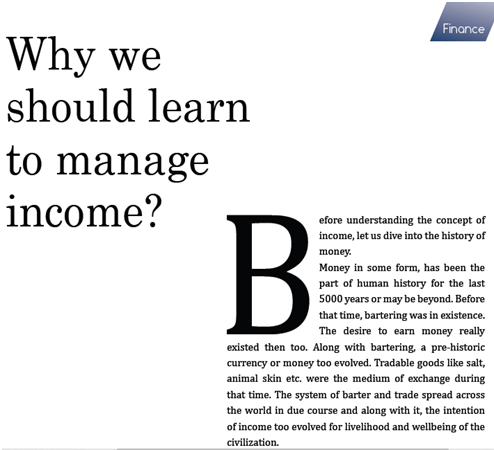 It’s interesting to note that the purpose of income however did not change even after 3000 years. And requirement of Money for livelihood and survival still remained one of the driving forces. However different source have evolved many fold.

Why after 100 generations, lots of family are not having enough income or wealth to manage daily livelihood. Does that mean, this group of people did not earn money, or they earned money but could not preserve or manage it?

For example, today Rich people or those who earn more are in high debts, as bank is willing to pay loan to people having money, is not it?

Like Mr. Sanjib, lots of people are in the rat race of earning more income without realizing the importance of financial literacy. Highly educated people fail to manage the income.

Saving and investment must not be the goal, but Children Education, Vacation in Italy, Making 5 Cr in 10 years time, buying a house etc. should be the goal. Majority of people try to guard the money by keeping in the saving account without realizing the concept of inflation.

Managing Money Is both Art & Science

Human physic does not allow human beings to behave in a regulated manner as required in respect of money. Inflation is a bug of money which majority of people fail to understand and become its victim. For example at present the value of 1 lakh rupees has lesser value comparatively to the value i.e 10 years back, that’s inflation of modern money.

We may not have noticed the prices of basic necessities for survival have increased by 10 times in 20 years. Have we?

If majority’s income also increase in the same rate? The answer can even be replied by everybody. When majority of people’s income did not rise at the same rate, management of saving and spending becomes inevitable. That’s the irony and people at large fail to notice this.

In other words, when price of goods and services are rising and income is not rising, then it’s a serious alarm for the family. That family needs a serious review and management of their income. People fall victim of liabilities like Personal Loan, Credit Card Purchases and gradually it becomes a habit and may pass to next generation.

Mr. Robert Kyoski Author of Rich Dad Poor Dad published a book in the year 1997, explained income in a very concise form and some insight to understand and have better control over spending. He explained, if we lack in understanding the concept of income, then it will affect the whole financial health of a family for rest of their life. Even next generation is not escaped from such cycle.

Even well qualified people do not understand the meaning of asset and keep on accumulating liability in the hope of asset or income. If people fail to save and invest, they must consult Financial Expert. Mr. Robert advises one must understand the meaning of income and cash flow. Once you learn the difference between the three types of income your Financial IQ will shift.  Mr. Robert Kyoski explored three types of income: