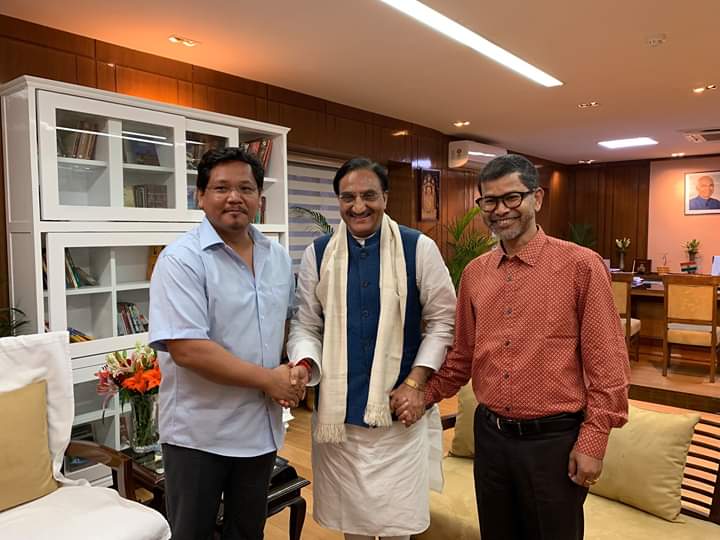 On the Draft National Education Policy, Rymbui apprised the minister that restructuring the entire educational facilities in the State would be a difficult exercise and would put a lot of financial burden as 50 per cent of the Schools in Meghalaya were run by minority organizations.

Rymbui also urged the centre that minority institutions should be allowed to manage the school managing committees through their sponsoring bodies so as not to dilute their sacrifice and initiatives taken especially in the elementary section.

He also said that restructuring school curriculum and pedagogy in a new 5+3+3+4 design will entail additional manpower and specific subject teachers will have to be appointed for teaching from Grade 9 to 12.

Expressing concern and financial burden for introduction of classical language, foreign languages in Schools,  Rymbui pointed that unless a special scheme is rolled out for recruitment of language teachers, offering such language at schools, colleges and universities would be a difficult exercise. The State government reiterated status quo be maintained regarding language policy.

Issues of stand alone teacher Institution like B.Ed and DIET was also discussed as it is very difficult for the College or DIET to integrate with other institution where The HRD Minister that the matter will be discuss.

Rymbui also raised the issue of D.El.Ed programme conducted by National Institute of Open Schooling (NIOS), wherein the trainees from 2013-15, 14-16 and 16-18 where yet to get their mark sheet and original certificates, even after completion of their courses.  He also informed that the results for exam conducted by NIOS in May 2019, where the original certificate and marksheets of the on-line batch yet to be received by the successful candidate.

Pokhriyal assured the Chief Minister and Education Minister that the matters will be taken up and necessary interventions will be made.

He said that due to shortfall of funds released by the Ministry, the state has been facing difficulties for implementation of SSA. The Chief Minister and Education Minister has urged centre to look into the matter.

On implementation of 9 model schools in Meghalaya, Rymbui said that funds for the centrally sponsored schools amounting to Rs. 15,03,00,00 (50 per cent of the central share) were released in 2011, however the project was discontinued in 2015 and the financial burden was given to the State. Rymbui urged the centre to reconsider the Model School Scheme for Meghalaya and ensure completion of the schools, which were initiated in the State. The Union Minister has instructed the department to examine the matter.

He pointed that NERIE has only 3 seats reserved for Meghalaya out of 50 seats in the B.Ed. course. He urged the centre to increase seat reservation for the State of Meghalaya in NERIE and requested to reserve quota for the state in EFLU Shillong Campus.

Pokhriyal assured the Chief Minister and Education Minister that the matters will be looked into.