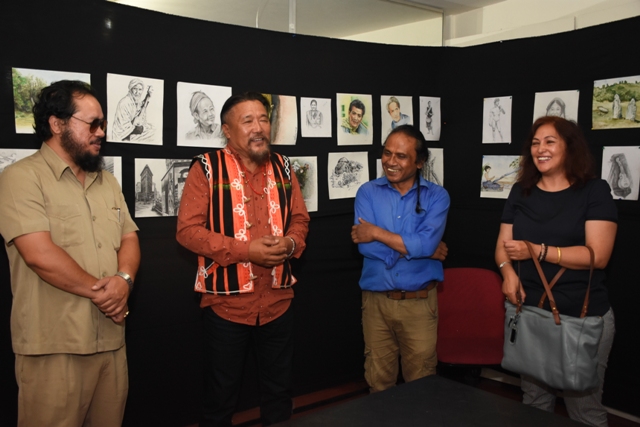 The Art Exhibition of the students of Riti Academy of Visual Arts is being organized at Mad Gallery, Umsohsun, Shillong. Altogether, there are around ninety artworks done by twenty student participants including the art teachers, Skhemlang Hynñiewta and Teisuk Chyne.

The Exhibition was inaugurated by the legendary musical exponent of the country, Mr Rewben Mashangva and grace by dignitaries including Mr N Munish Singh, Director, Indian Council for Cultural Relations, Shillong (ICCR) and Dr Madeline Yvonne Tham, Convenor, Indian National Trust for Art and Cultural Heritage, Meghalaya Chapter (INTACH). In his inaugural address, Rewben expressed his pleasure for the effort of Riti Academy in promoting young talents of Meghalaya, he said 'The children from remote corners of the State and the region should be given such platform to expose and promote their creativity'. The Director of ICCR, Mr N Munish Singh in his speech lauded the effort of Riti Academy and announced financial assistance to Riti Academy for its noble endeavour. He acknowledged the presence of Naga legendary musical exponent Rewben Mashangva on the occasion and in Shillong as a gesture of inspiration and encouragement to the entire art fraternity in the State.

Some of the outstanding artworks of the students are done by Denis Marbañiang, Baiamonlang Marngar, Aruna Thapa, Susan Marbañiang and Fasterfield Ryntathiang. The Convenor of INTACH, Dr Madeline Y Tham also share her thoughts on the occasion, while Art Teacher, Ariopagos Manner proposed the vote of thanks. However, the most exciting moment is the short performance on flute by Rewben Mashangva himself, which enthralled the gathering. The five day exhibition will be opened till Monday, the 30th September, 2019, which coincided with the birth anniversary of Crystal Gayle Kharnaïor, in whose memory the award is being constituted to promote visual art in the State. 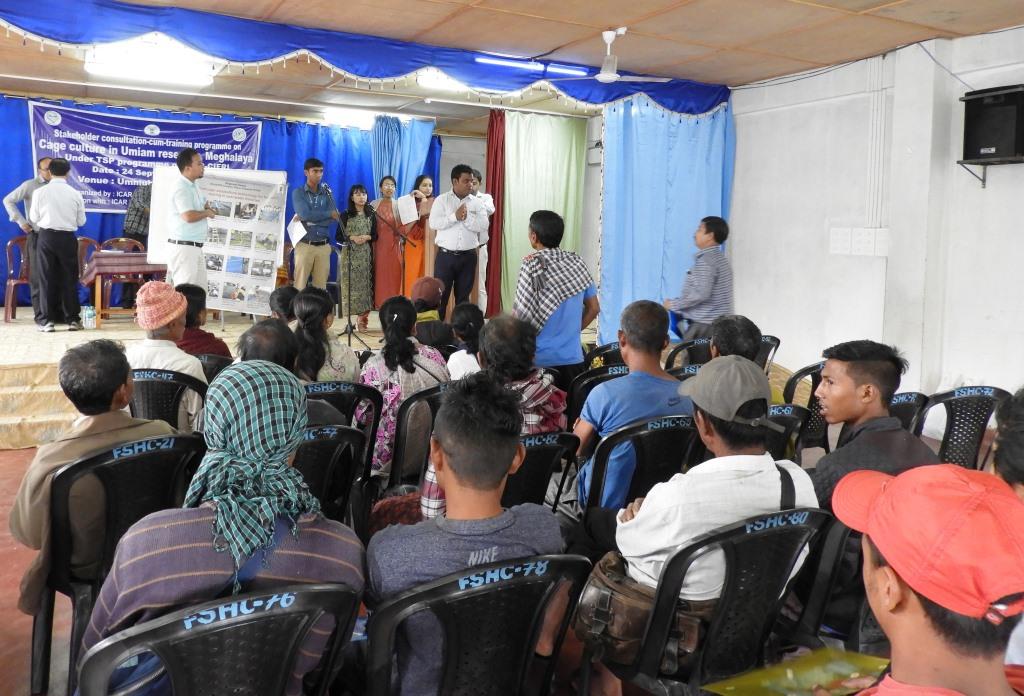 Mr. Brightstar K, Secretary of Ri-Bhoi Farmers’ Union welcomed the guests and participants for the programme. Dr. B. K. Bhattacharjya explained the purpose of the day-long programme. He informed the participants that cage culture in Umiam reservoir of Meghalaya is being initiated by ICAR-CIFRI, Barrackpore in collaboration with the ICAR RC for NEHR, Umiam and DoF, Meghalaya for the first time. It was possible because of the overall leadership of Dr. J. K. Jena, DDG (Fisheries), ICAR, New Delhi and initiative of Dr. B. K. Das, Director, ICAR-CIFRI, Barrackpore in sanctioning six CIFRI-GI cage unit (100 m3/cage). He stated that cage culture in reservoirs is coming up in a big way in states like Jharkhand, Chhattisgarh, Madhya Pradesh, Haryana, Maharashtra and Mizoram through technological back-stropping by ICAR-CIFRI, Barrackpore. Dr. S. Hazarika, Principal Scientist & Nodal Officer, TSP, ICAR RC for NEHR, Umiam stated that many welfare schemes of Govt. of India are implemented in NE states with moderate success mainly because of discontinuation of any schemes once the government support is withdrawn. He urged the fishers to continue cage culture even after withdrawal of government support so that it sets a good example for the fishers’ communities. Mr. Paul Tariang, Superintendent of Fisheries, Ri-Bhoi district stated that Meghalaya has sizeable fisheries resources in the form of reservoirs, rivers, wetlands and ponds. However, Meghalaya still meets much of its demand for fish consumed in the state from outside. He encouraged the fishers to take utmost interest for making this project a success even beyond the project period so that similar government support may be expected in future. Dr. S. K. Das thanked Dr. B. K. Das, Director, ICAR-CIFRI for sanctioning the cages, which is the first of its kind in Umiam reservoir. He stated that the ICAR-CIFRI and ICAR RC for NEHR came together for this initiative for the benefit of the tribal fishers of the region. Dr. Pronob Das motivated the fishers to take utmost care of the stocked fish in cages. Mr. D. Mazzao proposed the vote of thanks. He thanked the two ICAR Institutes for implementing cage culture in Umiam reservoir. He also urged his fishers to work sincerely as per the given guidelines for success of cage culture.

During the technical session on cage culture, resource persons from the two Institutes interacted with the fishers and explained them in simple local language with the help of a translator on different aspect of Cage culture including feeding schedules and monitoring.

With the aim to understand the current state of preparedness for response in the public health sector and to devise a regional plan for the same, a two days Regional Consultation Workshop on Strengthening Public Health Sector for Emergency Preparedness (EPR) and Response and Disaster Risk Reduction (DRR) for Assam, Meghalaya, Sikkim and Tripura was held today at the State Convention Centre, Shillong. The Workshop was organized by the North Eastern Council in collaboration with the National Health Mission, Government of Meghalaya and supported by UNICEF and OXFAM. Shri. Calvin H Kharshiing, Planning Advisor North Easter Council, Government of India inaugurated the workshop in the presence of senior officers from Health Department of participating states and representatives from UNICEF and OXFAM.

Speaking in the meeting Shri. Calvin H Kharshiing said that we are living in an age where there are multiplicities of natural disaster and the North East is highly vulnerable. He further added that there are unique challenges for the North East in the health sector. As per a study commissioned by NEC and carried out by NEDFi on the state of health care in the North East, some of the challenges identified were shortage of trained manpower, providing access to sparsely populated and remote far flung areas and improvement of governance in the public health sector. Stating that one of the targets under the sustainable development goals is to strengthen the capacities of all countries, especially of developing countries for EPR and DRR of national and global health risk, the NEC which is the regional planning body for the North East has many interventions and initiatives in the area of disaster management, one of which is working closely with NEIGRIHMS and NESAC to use drone technology to deliver essential services. Shri. Kharshiing added that the NEC looked forward to the recommendations of the two days consultations which can be taken forward in NEC’s planning in emergency preparedness of the health sector in the region. He further stressed on the need of evidence which could guide healthcare workers, especially for first time responders to reduce panic and bring in intervention that will help alleviate the situation when a disaster strikes.

Shri. Pankaj Anand, Director Programs and Advocacy, Oxfam India said that globally risk of disaster and emergencies is on the rise. Between 1998 -2017, climate related and geo-physical disaster claimed the lives of over 1.3 million people and rendered another 4.4 billion injured, homeless or in need of emergency assistance. In North East India, each state has a unique concern and challenge and the need of the hour is take stock of our preparedness. In the current state of affair, Shri. Pankaj Anand opined that the North Eastern States are far from equipped to efficiently respond to a massive public health disaster and ensure minimum causality and loss. Therefore, the is a need to work towards greater resilience to meet the challenges and also to works toward formulating specific preparedness action which can be linked to departmental flagship programmes.

Dr. Madhulika Jonathan, Chief of Field Office, UNICEF Assam drew attention to the plight of women and children in emergency situations. She also spoke on the need for minimum preparedness measures which should be in place for rapid response, including measures to strengthen new born health components and minimise the risk of gender based violence. Dr. Jonathan spoke on the need for quality programming and standards which will help align emergency response. The need to engage with communities and planning, monitoring and safe and confidential feedback systems and collaboration with all stakeholders were highlighted upon.

In his inaugural speech, Shri. Dkhar said that the State of Meghalaya, which lies in the seismically active Zone V, is prone to floods, fires, landslides, cyclonic storms and lightning strikes besides earthquake. Recalling the Shillong Earthquake of 8.7 magnitudes on June 12, 1897 which has devastated the plateau and affected the whole of North East India, Shri Dkhar said that although the death toll caused by the earthquake in those days was quite minimal, the rapidly growing human population in the region continually increases the seismic risk to several folds.

He said that with the growing population and urbanization especially in Shillong and some other headquarters in the State having high rise buildings, this kind of programme is necessary to equip our engineers, architects, planners, administrators and other stakeholders with the knowledge required for mitigation to prepare a safe environment for the citizens.

To carry out earthquake risk mitigation programme forwards, there is a need for trained manpower for taking appropriate actions before, during and after disaster in order to reduce the loss of human lives and financial consequences, he said. He expressed hoped that this forum will immensely benefit the participants and government officials to put into practice of the knowledge they gain from the training.

Dr. Amir Ali Khan of NIDM who is the main resource person in the training programme, will deliberate on several issues relating to earthquake risk mitigation management with special reference to Meghalaya. Other resource persons included Surajit Bordoloi, Dr. A Lyngdoh and Arulia Sangma.

GSI condemns the assault on its officers 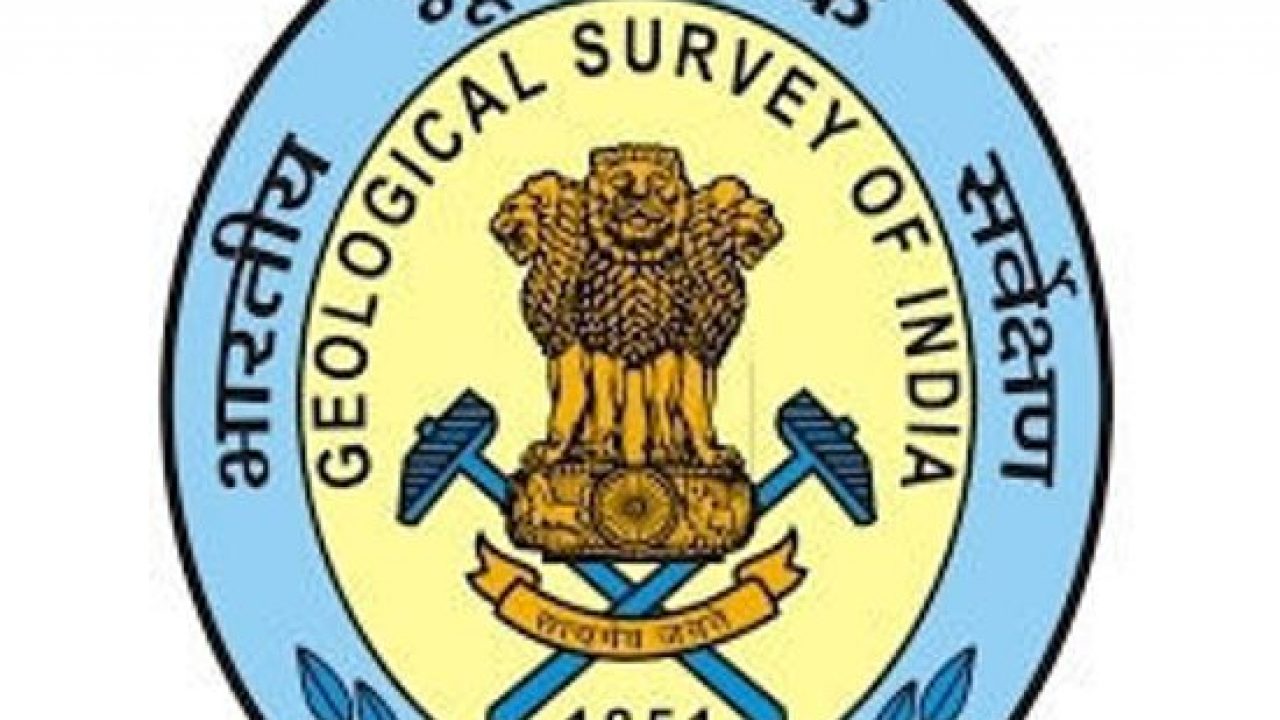 Geological Survey of India (GSI) condemns the assault on its officers and damage to government properties on 20th September 2019 while they were carrying out detailed mapping for Bauxite (an ore for aluminum) in the Mawiawtep village near Rambrai, West Khasi Hills District, Meghalaya.

Two senior scientists Shri Sushant Layek, Sr. Geologist & Shri Suhrit Pramanik, Sr. Geologist along with Shri B. Lyngdoh, Sr. Surveyor of Geological Survey of India, Northeastern Region (GSI NER) and a contractual driver, were attacked and beaten severely by four unidentified persons. The attackers also burn the Government vehicle was burnt and other instruments like Total Station, compass. The field party established its camp at Rambrai and the field work was initiated only after obtaining approval from the Syiemship and village headmen and formal intimation to the district administration as per the customary practice followed in the state of Meghalaya.

After the incidence, all possible efforts were made to evacuate injured officers from the field area with the help of the Superintendent of Police, Nongstoin and local villagers. A formal FIR was registered after the medical check-up of the officers at Civil Hospital, Nongstoin. Considering the seriousness of injuries sustained by the officers (injuries in head, arms and legs) the officers have been shifted to Shillong during the night itself and one of the officers has been hospitalized with severe injuries in Woodlands hospital, Shillong. The other officer has sustained injuries in head and other parts of the body. Both the officers have been advised to go for detailed medical examination. GSI is a department of Govt. of India and works for the identification of presence and prospecting of mineral resources only (except Uranium and other radioactive minerals), it never involves in any kind of exploitation and mining activities which is the sole prerogative of the State Government. GSI also carry out works related to the societal issues particularly landslide studies, geotechnical investigations for communication and hydroelectric projects besides research works on paleontology, petrology, earthquake geology etc. The officers from state governments are also regularly being trained by GSI for capacity building. Besides, GSI conducts free trainings for the students of colleges and universities. The incident has definitely put a question mark on the safety of the Government officers who are working for benefit of the people of the state. GSI strongly condemn such acts of violence that victimized its field officers and demand action against the perpetrators. It also requests the press fraternity to publish news regarding GSI activities after verification from the GSI office. GSI has temporarily suspended its work in that area until normalcy prevails.