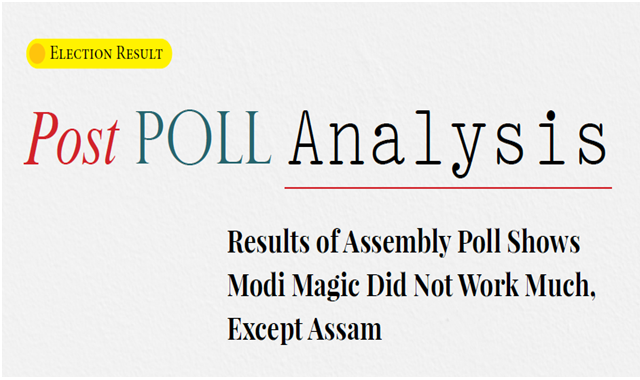 The political Kurukshetra to re-elect the legislative assemblies in Assam, West Bengal, Kerala, Tamil Nadu and Puducherry is just over.

Since these five regions have five different linguistic, social and political ecosystem, the results of the elections assumes massive significance in the backdrop of assembly elections next year in Uttar Pradesh, Goa, Manipur, Punjab, Uttarakhand, Himachal Pradesh and Gujarat.

Among them, Uttar Pradesh, Goa, Gujarat, Himachal Prades, Uttarakhand are ruled currently by the BJP. In Manipur, it is a BJP-led coalition government. Punjab is ruled by Congress.

The significance of 2021 polls emanated from the fact that the BJP failed to show its political importance in West Bengal and seen as an abysmal failure of the Prime Minister Narendra Modi and the Home Minister Amit Shah as their whirlwind campaigns of massive dimension simply flopped to stop the regional party Trinamool Congress from returning to power with thumping majority.

It is here where this assembly polls have been seen as a barometer for the coming 2022 polls in states and 2024 Lok Sabha polls. The bad performance of BJP is West Bengal and not so good performance of the party in Assam certainly is going to impact the next year’s polls.

The results showed different moods of electorate in different states. Each area going for polls showed their own regional touch with predominance of the regional parties putting the BJP in a fix. The problem of BJP further deepens as it marks an end of the myth of Modi Magic in West Bengal, Kerala and Tamil Nadu.

To understand the poll results in its real socio-political perspective, let us have a look at the pointers given below before we take up detailed analysis of it:

ii.                 West Bengal: The TMC pegs an impressive victory while the BJP ranks second. The Bengal was poll was very significant as neither the Congress nor the Left Front could win any seats.

iii.              Kerala: The state marked historic return of a Left government with the BJP figuring nowhere in the poll results.

iv.              Tamil Nadu: DMK emerges victorious putting AIADMK in the second rank. This election is very significant as the BJP won four seats proving it still has a chance to perform better in the 2024 Lok Sabha polls. The Congress offered a relatively moderate show winning 18 of the 25 seats allotted to it by its coalition partner.

Cardinal Trend of the Polls

The results of the polls in five regions came in line, more or less, with the predictions of Exit Polls.

The just concluded poll is very important from the angle of electoral politics due to its trends. It now yet remain to be seen if they would be trend-setters in the 2022 assembly polls and 2024 Lok Sabha polls.

Following trends emerged as the polls:

·        BJP Retains its Grip over Voters in Assam: The majority Hindu community in Assam, by and large, was influenced by the Hindutva card of the BJP helping it regain its power.  Side by side, the good performance of AIUDF clearly proves there is a communal divide in Assam. The bad performance of Congress is an indicator that majority Hindus in Assam no more trusts it due to its Muslim tilt. In fact, the Grand Alliance of Congress, AIUDF and eight other regional parties did not cut much ice. This will impact longevity of Grand Alliance and probability of Alliance Partners going alone in the 2024 parliamentary polls. The AGP got nine seats which is minus five from the last assembly polls. Here, the need for AGP’s post-poll introspection is needed for a drawing a suitable strategy for the 2024 parliamentary polls.