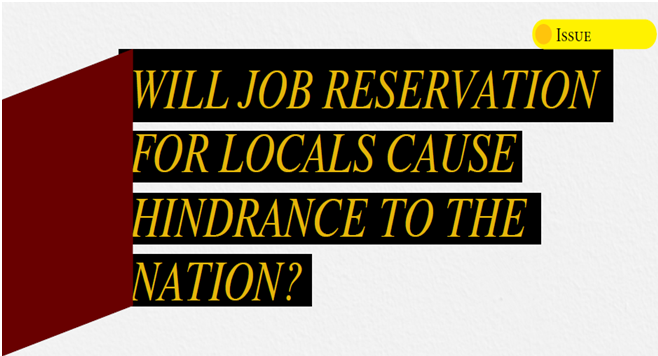 A large number of states in India are contemplating on 75 per cent reservation for the local people in education and employment sectors. A recent step initiated by Haryana, Madhya Pradesh, Rajasthan, Jharkhand, Maharashtra, Tamil Nadu. Andhra Pradesh and Telangana point out their intention to accord priority to the sons-of-the soil in government organisations as well as in private companies, the Multinationals, notwithstanding. Naturally, the attempt by such states has created uproar and this has caused discontentment among the people from various walks of life.

Hardly had the Union Home Minister Amit Shah commented after visiting Hyderabad recently that it should be elevated as one of the unique cities in India with its vibrant atmosphere in facilitating the process for the awe-inspiring projects and brushing up the standard of living for the working class, as well as for the people from various walks of life, came the bombshell from the Andhra Pradesh Chief Minister, Y.S. Jaganmohan Reddy that his administration has decided to provide priority to 75 per cent of the local people in the government and private sectors, thereby scuttling the Centre’s ambition to embark on the major cities in India a cosmopolitian atmosphere that facilitates the employees and workers  from Kashmir to Kanyakumari to relocate and scout for jobs that suit their career prospects. It is not surprising to view the decision by Jaganmohan, as he wanted to prove his detractor and the Telugu Desam Party Chief N. Chandrababu Naidu wrong, when he boosted during his tenure two decades ago that the then U.S. President Bill Clinton rated him as the best Chief Minister around that time and called him as “Cyber Naidu’, because of the enthusiasm he had shown in developing the software sector ahead of Karnataka.

When the Haryana Governor Satyadev Narayan Arya gave his approval to the State Employment of Local Candidates Bill, 2020 for 75 per cent reservation in private sector jobs, apart from the public sector, for the residents of Haryana, it was amply evident that the state government would leave no stone unturned to ensure that it would stick to its stance and would not care less for its snowballing effect in future. The enactment of the legislation, a promise made by the ruling BJP’s coalition partner Jannayak Janta Party (JJP), during the assembly election, though will usher in array of challenges because of its various clauses. For instance, the companies would not be in a position to hire more than ten per cent of their employees from a single district of the state. Importantly, Haryana was going through the farmers’ agitation and the JJP leadership has been facing mounting pressure to severe its ties with the BJP.

The new law will embolden JJP leader Dushyant Chautala to gain a foothold among the youth, 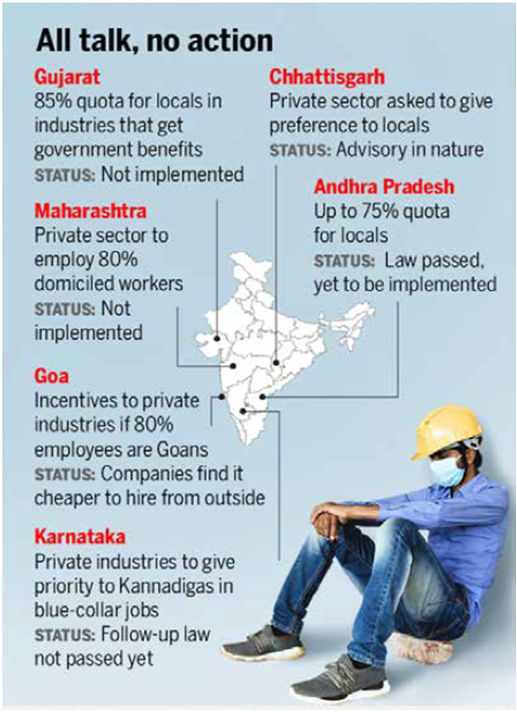 which the party relies on it as its vital vote bank. Dushyant hastened to term the move as the "happiest moment for the youth of Haryana”, before adding that the government would frame the rules at the earlier for swift implementation of the law. The Haryana Chief Minister Manohar Lal Khattar was candid in his utterances that his party wanted 90 per cent reservation for the local people, but later during the internal deliberations and discussions with the captains of the industry, they realised the folly of exceeding 75 per cent. He also reasoned that it was part of the Common Minimum Programme of the BJP-JJP coalition government, which was formed after the October 2019 assembly election.

The spirit of the bill goes against Prime Minister Narendra Modi’s desire for ease of doing business as he often reminds the people with his coining of phrase, “minimum government and maximum governance”. When the Covid-19 pandemic and assembly elections to the five states have consumed most of the time of the Prime Minister and Amit Shah, the Centre’s frantic attempts to impress upon some state governments that are stern in their move to focus on reservation for the local employment has ended in vain.   There is no iota of doubt that Haryana accounts for more than half of India’s automobile manufacturing and is the headquarters of 75 per cent of the Fortune 500 companies present in India. Moreover, it has 23 special economic zones.

Among other manufacturing and services sector hubs in the country, Andhra Pradesh government recently legislated a law similar to Haryana, while the B.S. Yediyurappa-led Karnataka government’s new industrial policy has envisaged 75 per cent job quota for Kannadigas. There is a strong advocacy from Uttar Pradesh, Uttarakhand, Madhya Pradesh, Gujarat, Rajasthan and Maharashtra, among others, for such legislation.

The Jharkhand government led by its Chief Minister, Hemant Soren, while approving 75 per cent reservation for sons of the soil in public sector and the private sector for employment has indicated that it would stop migration of working class. The state government also made it crystal that jobs with up to salary of Rs 30,000 per month would be reserved for local people. The Chief Minister also met stakeholders in Delhi to discuss a draft on the Jharkhand Industrial and Investment Promotion Policy Bill, 2021.

NAASCOM recently conducted a survey to find out the impact of the Haryana bill on the working class. The survey, covering around 73 companies with  approximately 1,44,000 employees, has recorded that the new law will impact about 150,000 current jobs in the state. The respondents also expressed concerns over equality of opportunities and inclusion policies, which might be affected considerably due to the new local reservation law. A section of academicians assert that Domicile-based reservation laws would create an adverse effect in the labour market as it significantly changes the demand and supply dynamics. They also apprehend that a mandatory requirement of reservation for 75 percent locals would cause a demand supply mismatch as far as seeking skilled workers are concerned. This, in turn, might lead to a reduction in demand among employers, who might hunt for lesser number of employees and labourers in order to avoid hiring unsuitable candidates. Some employers would not be averse to having a contractual-based employment and remote-based recruitment of candidates from other states. Thus, instead of generating employment prospects, there is a possibility of an increase in the unemployment rate, if not under-employment throughout the nation in due course.

Both the Federation of Chamber of Commerce and Industry and Confederation of Indian Industry opine that the governments cannot insist on an increase in employment ratio to the captains of the Industry as most of the companies are not expected to wed the nation at the cost of their turnover and profit-making motivations, especially when some companies are not disinclined to indulge in parallel economy, if not parallel corruption.