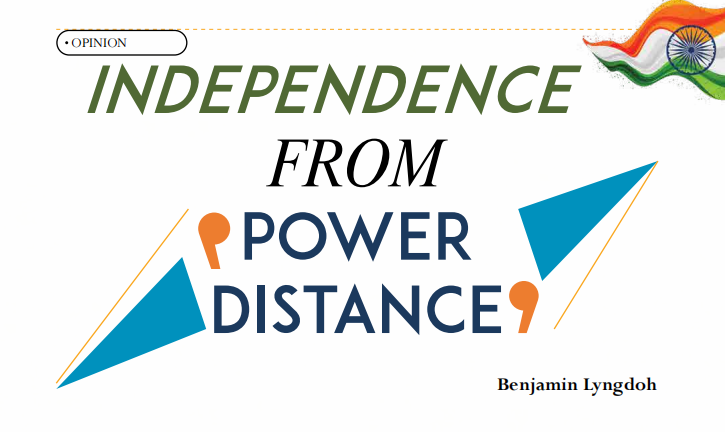 Power corrupts and absolute power corrupts absolutely. Due to its attractiveness, power is a highly sought after possession/position. This is since it is viewed as a vital source of satisfaction (or achievement). However, on closer comprehension this is a wrong perception of the word ‘power’ precisely because it is defined as ‘the ability or capacity to do something or act in a particular way’. It is more about responsibility and accountability and less about blatant authority. As such, one can infer that having power is not a desirable thing at all. Ignorance is bliss and that is the hallmark of a powerless life.

But, this is only a utopia. In daily transactions/interactions it is ‘believed’ and over time ‘made to believe’ that power is everything and without it, we are nothing. Many view ‘power positions’ as ‘demigod positions’ which cannot be questioned or inquired or corrected or dissented. This is precisely the ailment ailing Meghalaya today. The people revere power distance not out of respect; but, fear, disgust and defeat. If there is a need for independence from something, this is it! It has the potential to reshape the space of discourse, debate and dissent.

To start with, what is power distance and why is it important?

That way, it is also an apt representation of people and how they get about their lives. Arguably, power distance is the bed rock of our daily lives. The power distance index can either be of two opposing extreme limits – ‘high’ or ‘low’. In Meghalaya, the limit observed is ‘high’ and thereby implying that the people accepts the well structured power dynamics and look up to it to deliver across all facets of life. Power is unevenly distributed; however, no questions are asked even if power is unevenly distributed to the undeserving. A politician is a power centre and the people look up to him/her to deliver. As a result, people tend to behave in a ‘defensive-avoidance’ manner across issues of macro/micro importance.

It is important to realize as to when and where power distance happens. In actuality, it can be seen in people’s conformity and blind-acceptance. The trend is that what the high and mighty say are the ultimate truth and the final word. If the people in power say so, then it is so, understood so, perceived so and finally executed so! It breeds a culture of looking up to a few no matter how unworthy they are. In the process, the people do not realize their self-worth and capabilities to do something good and bring change to society. There are many talented youth who would out-do and out-run those in positions of power with their sheer tenacity and resourcefulness.