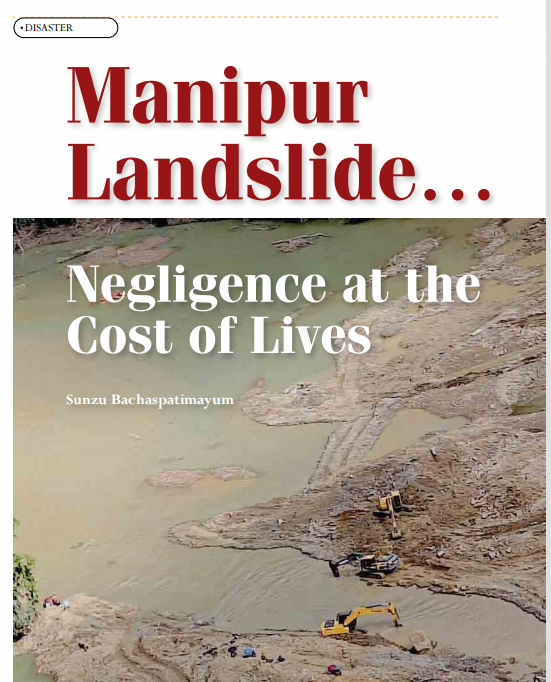 Landslides are the collapse of soil or rocks along mountain slopes of mountains normally during the monsoon. The mountainous ranges found in Northeast India being young are landslide prone. This year the South West monsoon arrived early in the month of June with the weather department recording a high rainfall of 435mm in June alone in Manipur.

A massive landslide struck on the intervening night of 29-30 June 2022, in Manipur’s Noney district, completely destroying the railway yard at Tupul in Makhuam village, killing 61, injuring 27 and bodies still to be found.

Migrant labourers working at the construction site, locals and Territorial Army personnel guarding the construction sites who were occupying the yard were mostly in their slumber when the natural fury was unleashed. The landslide area covered about one kilometre with the debris falling onto the Ijei river and obstructing its flows through Tamenglong & Noney Districts of Manipur.

Manipur Chief Minister, N. Biren Singh called it the worst natural disaster to have struck the State and said that “30 of the deceased are Territorial Army personnel stationed at the railway yard to provide security to the on-going railway construction works of the Jiribam-Imphal railway line. The rest are railway officials, labourers and locals.”

Romen Phukan is one of lucky migrant labourers from Assam who were at the site of the incident on Wednesday night (29 June), when the fatal landslide washed away their camps in Tupul, burying those at the site under boulders and mud. Phukan revealed that there were 25 of them from Assam’s Morigaon who were working as labourers on the Jiribam-Imphal railway in Manipur.

Startled by the screams for help after the landslide hit their camp, Phukan recalled  how the horror unfolded, seeing his friend  die in front of him moments after he saved his life.

"It was a normal night - until the earth moved. We were watching a film and slept after midnight. We were in deep sleep until we woke up to the earth shaking, like an earthquake. Soon, the hill came crashing down. There was mud and boulders. Our camps were submerged and everything was washed away into the river, even people," says Mr Phukan, who had returned to the work site four months ago from Assam. "I was buried under the mud. But somehow, I managed to remove mud and catch my breath" , he told EP.

“The water level in the river was rising and people were screaming for help. They screamed 'bachaao bachaao', but no one could help another," he says.

"I was saved by my friend Gopal Phukan. He pushed me away from the water. But moments later he was swapped away by the mudslide," he says. "I heard him scream for help but as the water level rose, the screams faded".